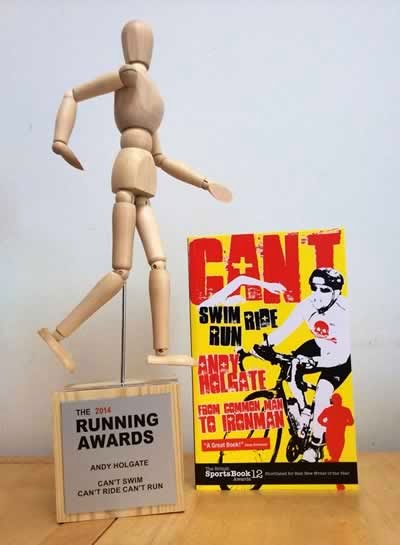 Andy’s book about his journey from – as he says - overweight couch potato to competing in Ironman triathlons beat off stiff competition from eleven other finalists to take the award which was voted for by the public. The awards took place at a gala reception in London.

“I’m absolutely delighted and somewhat shocked to win this award.” Said Andy. “I’m never likely to win a race, so thanks to all that voted for me.”

His book "Can't Swim, Can't Ride, Can't Run: My Triathlon Journey from Common Man to Ironman" follows his attempts to complete an Ironman triathlon consisting of a 2.4 mile swim and a 112 mile bike ride followed by a marathon.

He weighed 18 stone when he began training and could not even swim.  But since his first triathlon in 2006, he has run, swum and cycled thousands of miles and competed in events all over the world.

Andy said: “When I first went to the swimming pool, I splashed about and swam like a rock but thanks to a good book, some sage advice and intense practice, I completed my first race several weeks later.

“I fell in love with cycling despite my lack of balance, an aversion to hills, not knowing how to fix a puncture and being adamant that tight Lycra was a look that didn’t work on me”.

You can find out more about Andy, his story and his book at http://ironholgs.wordpress.com/ and on his facebook page.
Posted by Chris Satori at 16:09