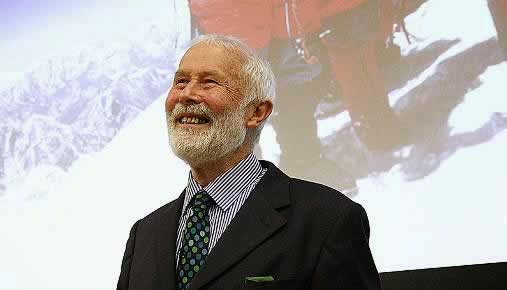 As part of Lancaster University’s 50th anniversary celebrations its Chancellor, the pioneering mountaineer Sir Chris Bonington, will step off the top of landmark Bowland Tower on campus to raise money for five very different charities on Sunday 22 June between 10am and 4pm.  Engaging the resourcefulness he's famous for, he'll be bouncing down by a rope, as his climbing is a lot fancier than his flying.

He will be joined by 70 thrill seekers, both staff and students, who have all bought tickets to share the experience and raise money for charity.

The event is being run by abseiling experts, Langdale-based Highpoint Mountain Guides, who will provide help and guidance to all participants.

Sir Chris is expected to make two descents of the 14-storey tower, one at noon and the other at 2pm, and everyone is welcome to come and spectate.

Sir Chris, who will celebrate his 80th birthday this August, will be retiring as Chancellor later this year (to be replaced by former Health Secretary Alan Milburn). Bonington  is an outstanding mountaineer, having led the expeditions that made the first ascents of the South Face of Annapurna and the South West Face of Everest. He realised a dream in 1985 when he reached the summit of Everest.

“I’m really looking forward to abseiling down the Bowland Tower for charity,” said Sir Chris. “It might not be quite as high as The Shard which I abseiled down a couple of years ago for Outward Bound but it will seem quite enough for anyone doing it on the 22nd and it will be very special for me in this, my final year, as Chancellor and knowing it’s very much in the tradition of our wonderful University since the Mountaineering Club abseiled it regularly a few years back.

“It is also very fitting to make the abseil to celebrate our 50th Anniversary.

“For all who go for it - the view from the top is fantastic - much more beautiful than the one from the top of The Shard.”

The abseil will raise funds for the Student Hardship Fund, which supports students from less privileged backgrounds, Ageing Research, Food Security, who help to improve food security for some of the world’s most vulnerable societies, St John’s Hospice in Lancaster and the Dukes Theatre’s ‘MAKE Project’, which provides creative opportunities for young people.
Posted by Chris Satori at 14:12