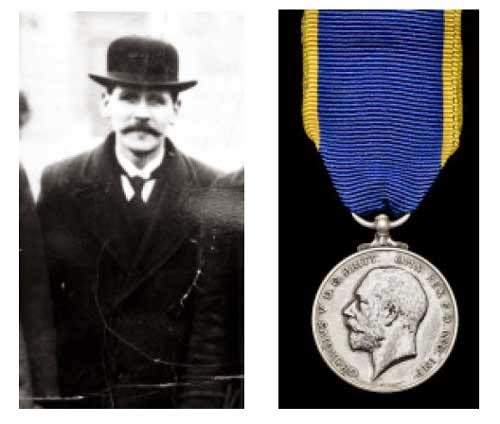 Only 25 Silver Edward Medals (Industry) have ever been awarded (between 1907 and 1949) so it is a medal rarer than the Victoria Cross - and four of the silver medals were awarded to men on that single night at White Lund.

The sale at Spink in London is on Thursday, so there is not much time, and the estimate for £1400 to £1800 for the medal appears very low - other similar medals have sold for four times this amount.

The Friends Committee have pledged money towards the bid, and some money is being used from the City Museum's Acquisition budget - but the more money donated or pledged, the better.

Sergeant Thomas Coppard was on duty at the White Lund Munitions work on the night of the terrible explosion in October 1917 which killed ten people, shattered windows in Morecambe and Lancaster and had shrapnel fly as far away as Scotforth and Quernmore.

The Lancaster Guardian reported at the time:


On the evening of October 1, 1917, an explosion at the National Filling Factory on White Lund was so strong its force was felt as far away as Burnley. Ten people were killed during the night the majority of whom were firemen.

Most of the factory workers were in the canteen on their supper break when the alarm was raised around 10.30pm which probably saved many other lives though in the rush to escape the site, some were injured. The biggest explosion occurred around 3am.

The works fire brigade was unable to contain the fire which spread quickly and there were some staff who put their own lives on the line to save further casualties. Among them was Thomas Kew who shunted 49 ammunition trucks holding 250,000 live shells out of the danger zone to prevent further explosions.

Shells which had been filled at the factory began to explode with the intense heat. In Morecambe, shells were seen flying overhead into the bay while in Lancaster shop windows were blown in and shrapnel travelled as far as Scotforth and Quernmore....The factory was so wrecked by the explosion that it was out of commission for the rest of the war.

The cause of the disaster was never found though some suspected spy action or a Zeppelin air raid.

The National Filling Factory was one of two new factories which had been opened in the area by the Ministry of Munition by the middle of 1916. The National Projectile Factory in Caton Road was mainly turning and filling shell cases delivered from Barrow.

Such was the pride in these factories and the work they were doing for the war effort that both were visited by King George and Queen Mary in May, 1917 when they were presented with a silver plated shell as a memento.

The real shells were transported from Caton Road to White Lund where they were filled with explosives. This factory had taken seven months to develop, covered 400 acres and included 150 buildings.

More than 8,000 people worked in these factories at their peak and three quarters of them were women."


• Make your pledge by email to the Friends of Lancaster City Musuem at folcm@mail.com

• Full details of the Appeal can be found at: http://www.kingsownmuseum.plus.com/friends01.htm
Posted by John Freeman at 16:28