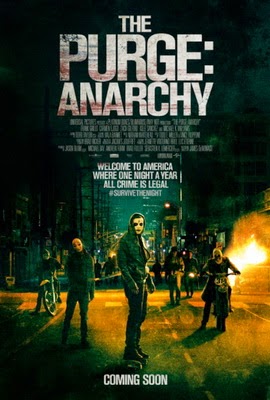 We have four new releases during the coming week, animation with The House of Magic (U) and action/adventure with Hercules (12A), The Purge: Anarchy (15) and Guardians of the Galaxy (12A).

The films Tammy and Jersey Boys are no longer being screened. Also it seems likely that we are soon to loose 22 Jump Street and The Fault in our Stars. However to compensate this week provides another chance to catch The Amazing Spider-Man 2, Rio 2 and Postman Pat: The Movie.

This is a poor period for high culture. However of interest is the Dukes screening of Richard Linklater epic Boyhood. This is a film that took twelve years to make as it follows the development of a man from infancy to adulthood.

The Amazing Spider-Man 2
Director: Marc Webb
Certificate: 12A
Cast Includes: Andrew Garfield, Emma Stone, Paul Giamatti, Jamie Foxx
Garfield plays the role of Peter Parker and his alter-ego Spider-Man. He must defeat Max Dillon (Foxx) who becomes transformed into the super-villain Electro, in order to save New York. The strength of the Spider man franchise lies in the tribulations of his juggling his role as super-hero with the more mundane aspects of is life and his relationship with girlfriend Gwen Stacy (Stone). With jokes, special effects and love interest this is a worthy sequel in the Spider-Man series.

The Fault in our Stars
Director: Josh Boone
Certificate: 12A
Cast Includes: Shailene Woodley, Ansel Elgort, Laura Dern, Nat Wolff, Mike Birbiglia, Willem Dafoe
A romance between Hazel (Woodley) and Gus (Elgort), teenagers who have just months to live when they meet at a cancer support group. The movie is based on the best selling novel by John Green and it is predominantly aimed at a young adult audience. With an excellent dialogue the film is a very moving love story that could easily leave you in tears.
Posted by Unknown at 17:26