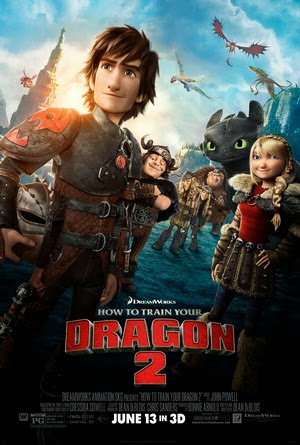 This period sees the formal release of the Dreamworks animation How to Train Your Dragon 2 (PG) and on the 17th July we have the release of the science fiction prequel Dawn of the Planet of the Apes (12A).

We have lost the epic X-Men: Days of Future Past. Also it is likely that we will soon loose Chef, Maleficent, Edge of Tomorrow and 22 Jump Street. However to compensate there is the return to the screens of The LEGO Movie and The Love Punch.

For fans of the band Pulp there is a documentary following their comeback tour of 2012 with Pulp. Also the Dukes are screening Jersey Boys which is Clint Eastwoods musical re-telling of the story of 'The Four Seasons'.

High culture is represented with the Dukes and the Vue cinemas showing NT Live: Skylight. Also the 13 July sees the monthly Film Quiz at the Dukes.

Belle
Director: Amma Asante
Certificate: 12A
Cast includes: Gugu Mbatha-Raw, Emily Watson. Sarah Gadon, Matthew Goode, Tom Wilkinson, Sam Reid
Inspired by a painting and set in England in the eighteenth century, Belle tells the story of Dido Elizabeth Belle (Mbatha-Raw), an illegitimate mixed race daughter of Admiral John Lindsay (Goode), She and her cousin are raised by Lord Mansfield (Wilkinson) and his wife (Watson) where both girls are groomed for marriage. Lord Mansfield comes to finds himself presiding over a slavery case whereas Belle becomes attracted to the aspiring lawyer John Davinier (Reid) who awakens her social conscience. The movie benefits from a very strong performance from Mbatha-Raw and it addresses issues of slavery and social inequality via the medium of a period romance. A fine, enjoyable and serious film.

Edge of Tomorrow
Director: Doug Liman
Certificate: 12A
Cast Includes: Tom Cruise, Emily Blunt, Jonas Armstrong, Bill Paxton
In the near future aliens attack the earth and Major Cage (Cruise) is killed in battle. However he becomes enveloped in a time loop in which he repeatedly re-lives the combat and his death. However he learns more with each incarnation and increasingly becomes a more formidable solider. The film is based on the novel 'All you Need is Kill' by Hiroshi Sakurazaka, and it is difficult to write a review that does not refer to 'Groundhog Day'. However the movie in not without moments of dark comedy that adds to the entertainment.

Jersey Boys
Director: Clint Eastwood
Certificate: 15
Cast Includes: Erich Bergen, Michael Lomenda, John Lloyd Young, Christopher Walken, Vincent Piazza
A film version of an award winning musical telling the story of the formation of the rock group 'The Four Seasons'. This in an entertaining movie that succeeds in recreating the rock and roll era. The highs and lows of the working class band members are explored against a backdrop of fine musical accompaniments.

Tammy
Director: Ben Falcone
Certificate: 15
Cast includes: Melissa McCarthy, Susan Sarandon, Dan Aykroyd
In one awful day Tammy (McCarthy) has been fired from her job, crashed her car and discovered her husbands fondness for a neighbour. She needs to escape and thus joins her grandmother Pearl (Sarandon) in a trip to see the Niagara Falls. McCarthy plays the working class slob Tammy to perfection and her grandmother lusts after men and drink. Hence the film is a road movie with all the ingredients of a first class comedy. However the elements do not quite come together and the film does not achieve its full potential.

The Fault in our Stars
Director: Josh Boone
Certificate: 12A
Cast Includes: Shailene Woodley, Ansel Elgort, Laura Dern, Nat Wolff, Mike Birbiglia, Willem Dafoe
A romance between Hazel (Woodley) and Gus (Elgort), teenagers who have just months to live when they meet at a cancer support group. The movie is based on the best selling novel by John Green and it is predominantly aimed at a young adult audience. With an excellent dialogue the film is a very moving love story that could easily leave you in tears.

The Love Punch
Director: Joel Hopkins
Certificate: 12A
Cast includes: Pierce Brosnan, Emma Thompson, Tuppence Middleton, Timothy Spall, Celia Imrie
Richard and Kate (Brosnan and Thompson) are a divorced couple who hit financial hard times as Richard is facing bankruptcy as a result of a corporation wiping out his company's pension fund. Vincent, the villainous boss of the corporation, has used these proceeds to buy a diamond necklace for his own bride. Richard and Kate, along with friends Jerry and Penelope (Spall and Imrie) decide to get revenge by stealing the necklace and using this to replenish the retirement fund. This is a comedy with big name stars set in an exotic location. The humour seems a little contrived at times but in all it works well to make a genuinely funny and entertaining movie.
Posted by Unknown at 13:56