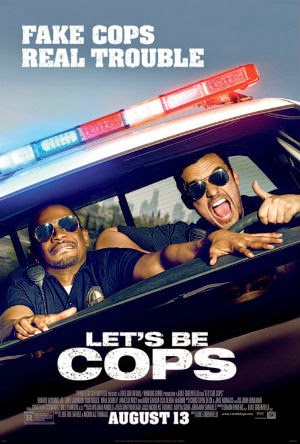 There is quite a churn of movies this week with five new releases being screened. There is romance with Arthur and Mike and family animation with Thomas & Friends: Tale of the Brave. We have action/adventure with Lucy, comedy action with Lets be Cops and the dark drama Sin City 2: A Dame to Kill For.

We have lost five movies which are no longer being screened. These are Step Up: All In, Earth to Echo, Postman Pat: the Movie, Hercules and The Purge: Anarchy. It is also likely that this period will be the last chance to Mr Peabody & Sherman and Legends of Oz: Dorothy's return. However we see the return of Maleficent and The Fault in our Stars.

All three local cinemas will be showing episode one of the new Dr Who series with Peter Capaldi making his debut as Doctor Who: Deep Breath, whereas another vein of high culture is represented by Globe Macbeth showing for one night only.

Arthur & Mike
Director: Dante Ariola
Certificate: 15
Cast includes: Colin Firth, Emily Blunt
A romantic road movie originally released in Toronto in 2012 with the title 'Arthur Newman' where it received rather mixed reviews. The film tells the story of Arthur Avery (Firth) who has an un-fulfilling job and a history of failed relationships. He fakes his own death and takes to the road adopting the identity of Arthur Newman. He meets and falls in love with Michaela (known an Mike in the film) who is a kleptomaniac woman also on the run. They start to break into other peoples homes to assume their identity. Ultimately however their past catches up with them. This is a rather low-key movie expousing the message that you cannot run away from yourself.

Mr Peabody & Sherman
Director: Rob Minkoff
Certificate: U
Cast Includes: Ty Burrell, Max Charles, Ariel Winter
A DreamWorks comedy animation. Mr Peabody is a dog, but this does not stop him being an inventor, scientist, sportsman and general genius. Accompanied by his boy Sherman, the duo use their WABAC time machine in order to impress Sherman's friend Penny. However during their adventures meeting famous characters of history,they accidentally rip a hole in the Universe. As a result they must repair history in order to save the future. A great yarn and appealing family movie. There is little here to offend the youngest of children, and some of the jokes will entertain an older audience.

The Fault in our Stars
Director: Josh Boone
Certificate: 12A
Cast Includes: Shailene Woodley, Ansel Elgort, Laura Dern, Nat Wolff, Mike Birbiglia, Willem Dafoe
A romance between Hazel (Woodley)and Gus (Elgort), teenagers who have just months to live when they meet at a cancer support group. The movie is based on the best selling novel by John Green and it is predominantly aimed at a young adult audience. With an excellent dialogue the film is a very moving love story that could easily leave you in tears.

What If
Director: Michael Dowse
Certificate: 15
Cast Includes: Megan Park, Adam Driver, Zoe Kazan, Daniel Radcliffe, Rafe Spall
Toronto medical school dropout Wallace (Radcliffe) strikes up a friendship with Chantry (Kazan), a woman he meets at a party. He has given up on love following failed relationships whereas she has a long term boyfriend (Spall) who for much of the film is away on a business trip. This leads to Wallace and Chantry spending increasing amounts of time together. Will they take the plunge and let their friendship mature into a relationship? This romantic comedy is reasonably entertaining with good dialogue and some slapstick humour.
Posted by Unknown at 17:31