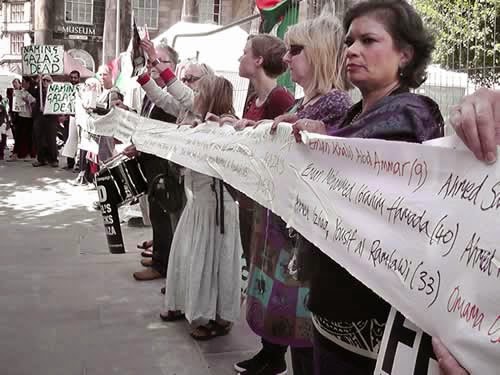 A fundraising night of live music will  be held on 6 September at the Gregson to raise money for Medical Aid for Palestinians. You can also donate online at www.map-uk.org.

Over the last few Saturdays visitors to Lancaster's Market Square will have seen local residents maintaining a protest against the mass bombings by Israel of Palestinian civilians trapped under years of siege in Gaza. On the 6th of August over 100 people from the Lancaster area met for a “Naming Gaza’s Dead” vigil in Dalton Square as a way of recognising the human identities of the mounting numbers of people who have died in Gaza.

Israel is a state that has, until now, always been strongly supported and aided  by the UK, and particularly by arms manufacturers BAE Systems, whose Leyland operations have a sister plant in Rokar in Israel. Barclays Bank is a heavy investor in arms supplies to Israel and in other occupation businesses.

At present the bombing has been halted by a very fragile ceasefire due to last another 4 days. A previous ceasefire agreement failed after just 2 hours when an armed Israeli patrol crossed into Palestinian territory on an unspecified mission and was intercepted and escaped in an exchange of fire. Israel subsequently bombed the area where they had been found, killing a number of people, including a member of the patrol who had been left behind. This soldier turned out to be from a British family who had migrated to fight for Israel.

It is hoped, for the sake of the thousands of wounded innocent civilians in Gaza and for all the civilians of Gaza and Israel, and indeed for the sanity of the world that the current ceasefire will hold better. A number of organisations worldwide have called for an end to the siege and bombing of Gaza and for a peaceful 2-state solution to be negotiated, although there is much less profit to be made by companies such as BAE and Barclays from peace than there is from war.

The vigil was a way of both marking and protesting the awful toll of death that has recently occurred in Gaza.
Participants hoped to appeal to people’s hearts by holding up a series of white fabric rolls, over 100m in length, onto which had been written the names of almost 600 of the Palestinian dead. A graphic representation may bring home to us just how many people have died than the numbers alone. However this represents less than one third of the total number killed – of whom almost 400 were children. Organisers tell us that the rate of slaughter of Palestinians by Israeli bombing has been so efficiently high that no-one has been able to keep up with the naming of the dead.

Israel has lost 3 civilian casualties to Hamas rocket fire in the current round of hostilities, one of whom was killed in a mortar attack while delivering sweets to front line soldiers during their ground invasion. The others were a Thai migrant agricultural worker and an Arab Bedouin who were in undefended areas.

So great was the response by Lancastrians to the call to join the vigil that the line of people stretched all the way through Dalton Square and a second section stood in front of the Town Hall.

Participants voiced their desire to stand in solidarity with the ordinary people of Gaza; to honour and give voice to civilians who have died and to humanize the numbers that have been reported to be rising daily in the news. Comments included:

“I am here today because I feel that we need to connect, we need to come together .. having a presence is sending a message. My worst fear is that the people of Gaza feel abandoned and alone … I wish them to know that we’re here for them today” said Gilma Andrade

“I am here to ensure that the names of people who’ve been killed are put into the public sphere, partly because this country is funding the military capacity of Israel. So I think it’s important that we know what that money is going to” said Richard Twine

The organisers are also collecting donations towards the ongoing medical needs of some 9,000 people injured by the bombs and missiles. Many will be in need of medical treatment for years to come – long after the media have moved on and we have forgotten this latest round of attacks.

They said "whilst it was heartening to see how much Lancaster people care, there must be a just and lasting settlement in this situation and it will ONLY come about by talking - otherwise it’s just a matter of time before we watch this particularly painful horror unfold on our screens again".

One onlooker told Virtual-Lancaster: 'Although I previously took up Israeli citizenship I returned home to the UK 18 years ago as I could not settle in a state that was violently embracing an apartheid system. It is quite obvious to me that the goal of the Netanyahu's Likud government was then and is now the incremental eradication of Palestine and its people and the final establishment of a one-state solution. However there are a great many Israelis who oppose this violence and who struggle, within a heavily militarised regime, for a just peace at great personal cost. They would be deeply glad to see this event, although their media would never report it.'

To watch a short film of the vigil visit http://youtu.be/6tmhScEWGlQ.
Anyone wishing to make a donation can do so via ‘Medical Aid for Palestinians’ through their website at www.map-uk.org and can feel absolutely confident that this is a verified, reliable and effective way to help people in genuine need.

A fundraiser gig, jointly organised by Lancaster Palestine Solidarity Campaign and local musicians will be held on Sept 6th at the Gregson Centre. The evening of live music will raise money for Medical Aid for Palestinians.

"Naming Gaza's Dead" was part of a series of vigils and protests organised by the Lancaster branch of the Palestinian Solidarity Campaign: info@lancasterpsc.co.uk They urge more local people to join and act together to bring a lasting solution to this untenable situation.