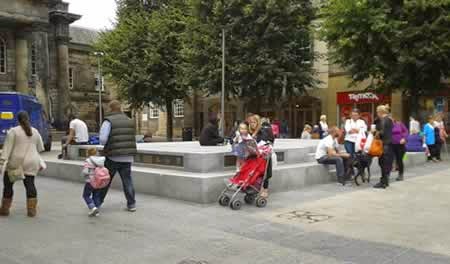 By now you will have noticed a new structure in Market Square. You may even have sat on it. Some would call it a 'plinth' (gah). But in fact, like all the world, it's a stage.  The Square Stage. 'Lancaster Sounds of Summer' is a two day musical extravaganza, this Sunday and Bank Holiday Monday, to celebrate our new Stage in the newly refurbished Market Square.

Sunday night headliners to get the city dancing will be Preston based soul funk band Templebys, and earlier you can shake some bootie to Jeramiah Ferrari - a four piece reggae-rock group from Manchester. Throughout the two dayer you can expect an eclectic mix of music ranging from Kirkby Lonsdale Brass Band, through the soothingly classical Players from Lancaster's Haffner Orchestra, to the upbeat, kickass sounds of Get Carter and the Convulsions.
Here's the programme:

2pm - 3pm Kirkby Lonsdale Brass Band – Brass
One of the oldest bands in the country starting in 1821 when the band played for the coronation celebrations of King George IV. The band has travelled to Europe and hosts exchanges with European brass bands as well as running a NW Band Competition since 1988. One of the best traditional acts around.

5pm - 6pm Jeramiah Ferrari – Reggae
From Manchester, simply the most ballistic reggae band ever. A ground-breaking rejuvenation of the genre.

8pm - 9:30pm Get Carter / Convulsions - Riff based manic retro
Lancaster based high energy retro mods together on one stage at the same time. Get Carter are led by Selector founding member and Hammond virtuoso James Mackie.

10pm - 11:30pm Templebys - Soul / Deep funk
Preston based soul funk band the Templebys are Lancaster Music Festival favourites with a combination of deep funk and hot-grit soul topped off with the searing vocals of Kim Hollin.

3pm - 4pm Franco & The Dreadnought – Indescribable
Guitar virtuoso John Blaylock from Manchester takes the acoustic guitar to places it's never been to before with blurring finger dexterity that would shame most Flamenco players.

4:30pm - 5:30pm Roomful of Mirrors - World, reggae
Cumbria based world music and reggae act that have been appearing at many NW festivals and always a favourite with their fun loving upbeat virtuosity.

Email ThisBlogThis!Share to TwitterShare to FacebookShare to Pinterest
Labels: Sounds of Summer, The Square Stage