We Are Improv to celebrate Enid Blyton at the Storey 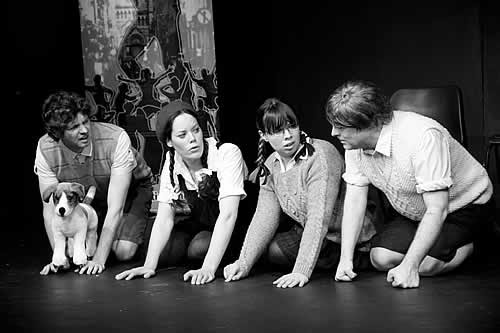 I say! On Thursday 28 August local improvised theatre company, We Are Improv invite the public to the Storey to celebrate Enid Blyton's 117th birthday in style with an evening of performance games and a chance to sit back and be swept into a nostalgic adventure worthy of Blyton herself. For just £3 on the door, the We Are Improv cast will take audience ideas and weave them seamlessly into a captivating adventure story complete with the ubiquitous lashings of ginger beer! Oh gosh!

This month marks the 117th birthday of the most prolific writer of children's fiction, who even as recently as 2010 remained in the top ten best seller list for children's fiction. Children and adults continue to devour her books and many writers and artists are inspired by her work, not least Lancaster's very own improvised theatre company, We Are Improv, who have been touring their improvised Famous Five-style adventure story for the past year. Perfect!

The first part of the night will be short and fun improv games and the second part of the night will be a completely improvised show, The Nearly Famous Five. With this they have delighted audiences at home and abroad, opened the UK Improv Festival and received five star reviews from delighted audiences who have marveled at their quick wit and ability to incorporate some truly bizarre audience suggestions into their slick theatrical format.

Enid Blyton may never have considered the dramatic potential of an abandoned corner shop, pronunciation rehab, a moth sanctuary or a cookery school but these brave actors have incorporated them with all the ease of rehearsed scripted actors and no matter how incongruous the suggestion the style remains authentic to the gung-ho, ginger beer and hockey sticks style of Blyton's original.

They were recently described by London-based comic theatre reviewer, Ruby Cera-Marle as 'Masters of their craft' and, not to be missed, the company are delighted to be performing once more in their home town before a second tour to Ireland.

Come along on Thursday, 28th August at 7.15 (for a 7.30 start) to the Storey Centre Auditorium for an evening of charming wit, nostalgia, seaside holidays and mysteries to be solved. Tickets just £3 on the door.

You can find out more about We Are Improv at https://www.facebook.com/weareimprovlancs.
Posted by Chris Satori at 18:50

Email ThisBlogThis!Share to TwitterShare to FacebookShare to Pinterest
Labels: The Nearly Famous Five, The Storey, We Are Improv