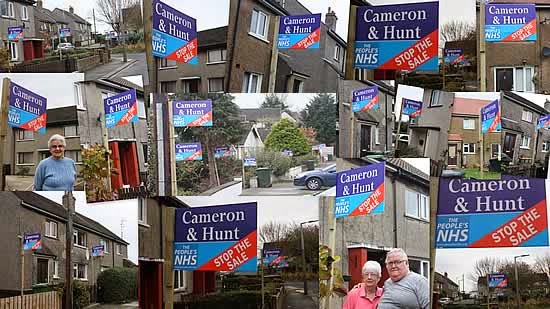 When Morecambe & Lunesdale MP David Morris scoffed that the 'No Health Selloff at Morecambe Bay' campaign didn't exist - and so didn't count - he really, seriously insulted its hundreds of local supporters. With hundreds of signs now going up outside houses in his constituency, he's going to have some difficulty pretending they don't exist now.

Households across 19 roads in Heysham South (so far) are taking a collective stand against the irreversible sell-off of their health services to America by raising 'Cameron & Hunt Estate Agency' boards with the clear message to ‘stop the sale’ and to veto the inclusion of the NHS in the EU-US trade deal called the Transatlantic Trade and Investment Partnership (TTIP).

By removing regulatory standards the TTIP legislation would force open the UK healthcare market (and most other markets) to US companies with considerably lower standards.

More signs going up - pictures online
You can see more pictures of households displaying their signs going up all the time on the 'No Health Selloff at Morecambe Bay' campaign facebook page.

“Hundreds of households across Heysham South are delivering a clear message by raising ‘stop the sale signs’ in protest over the sell-off of their health services and David Cameron’s refusal to veto the NHS from the dangerous trade deal called TTIP.

“Not only is the government selling off the NHS they are putting it at risk of irreversible privatisation because of TTIP. We expect our local MP to call on Cameron to ensure he uses his veto in Europe to protect the NHS.

"David Morris never told us on the campaign trail in 2010 that his party was going to embark on the mass privatisation of the NHS. The government had no mandate to sell-off the NHS. This is a clear message to our MP and to the government that it’s time to take the 'for sale' sign down from our hospitals and GP services and put our cherished NHS back into public hands.”

Collective action
The collective action is the beginning of a nationwide movement by the People’s NHS national campaign across hundreds of neighbourhoods in England, Scotland and Wales. You can find out more about it at http://www.peoplesnhs.org/.

The campaigners are angry that the UK’s entire health system is now up for sale because of the coalition government’s Health and Social Care Act. Since 2012 almost 70 per cent of NHS contracts put up for sale have gone to the private sector.

Tax breaks for private bids
One reason for this, the campaigners have discovered, is that private bidders are exempt from VAT - while NHS organisations bidding to continue providing services, such as hospital pharmacies, must include VAT costs in their bids, making real competition impossible and cheating the taxpayer.

TTIP
The function of TTIP is to remove regulatory safeguards that obstruct profiteering (see our previous story on TTIP).  TTIP would make the sell-off irreversible. By removing regulatory standards it would force open the UK healthcare market to US companies with considerably lower standards. Local residents are protesting that David Cameron and our local MPs David Morris and Eric Ollerenshaw did not mention these plans when they were out campaigning during the 2010 general election campaign.

WOW, well done to the people of Heysham South you should be very proud of yourselves, and a big congratulations to whoever thought up the ' Not for Sale' signs - very clever.