Local Cinema Round-Up for 4th to 12th March 2015 by peter@virtual-lancaster.net 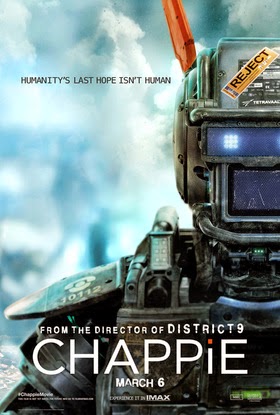 Three new releases come to the cinema this week. There is science fiction adventure with Chappie (15); adult comedy with Unfinished Business (15) and a mystery drama Inherent Vice (15). The latter was released at the end of January but is new to Lancaster.

Films that are no longer being shown include Peppa Pig and the the award winning Birdman & The Imitation Game. We do however see the return of family animation with the popular Paddington. On the down side it seems likely that the following films are soon to be dropped from the schedule Jupiter Ascending; The Wedding Ringer and The Theory of Everything.

All the new releases this week are aimed at an adult audience. However there is still an excess of family entertainment on offer with Big Hero 6; Shaun the Sheep and The Penguins of Madagascar.

This week finds romantic dramas well represented with Forty Shades of Grey and The Boy Next Door. Alternatively there is a good selection of comedy with The Second Best Exotic Marigold Hotel; Focus; The Wedding Ringer and Unfinished Business. Also there is high culture with RSC Love's Labour's Won and the Bolshoi: Romeo & Juliet.

Films of note are the French movie Cycling with Moliere showing at the Campus in the City and the drama mystery Inherent Vice playing at the Dukes.

Ex Machina
Director: Alex Garland
Certificate: 15
Cast includes: Oscar Issac, Alicia Vikander, Corey Johnson, Domhnall Gleeson.
Caleb (Gleeson) is a twenty-four year old programmer working at the world's largest Internet Company. He wins a competition and so gets to spend a week at the private estate of Nathan Bateman (Issac), the CEO of the company. Nathan unveils his work, a female android Ava (Vikander), and explains to Caleb that his role is to perform a Turing test on her to explore if her thinking and behavior is indistinguishable from that of a human. As Caleb gets to spend time with Ava, she starts to become dominant in their relationship, trying to recruit Caleb for her own ends. The film is reminiscent of Frankenstein, with Nathan increasingly taking the role of mad scientist who does not have the emotional empathy to support his creation. The movie is excellently shot with impressive special effects that do not get in the way of the story. A superb, thought provoking science fiction drama that explores the interaction between man and machine.

Selma
Director: Ava DuVernay
Certificate: 12A
Cast Includes: David Oyelowo, Carmen Ejogo, Tom Wilkinson
A slice of American History. The film follows Martin Luther King (Oyelowo) and the events that led up to the 1965 civil rights march from Selma to Montgomery which preceded President Johnson's (Wilkinson) signing the voting Act of 1965 giving equal voting rights to Afro-American citizens. Not only does this film show the build up to the march, it also portrays something of the humour and character of Martin Luther King and the strain that his work imposed on his marriage to Coretta (Ejogo) and on his friends. It covers much of the political backdrop to the civil rights movement and contains images of violence and racial slurs that were endured by the marchers in their quest for equal voting rights.

The Boy Next Door
Director: Rob Cohen
Certificate: 15
Cast Includes: Jennifer Lopez, Ryan Guzman, Ian Nelson.
Claire Peterson (Lopez) is a lonely English teacher. She is a single parent looking after her teenage son Kevin (Nelson) following separation from her unfaithful husband. A man half her age, Noah (Guzman), moves into the house across the street. Initially he helps Claire with chores, but their closeness results in a night of passion. Claire realizes this was a mistake and abruptly finishes the relationship. Noah however shows his unstable side. He becomes her stalker and threatens her, his obsession becoming ever stronger till there is a final culmination at the end of the film. The movie however has attracted rather poor reviews as both the plot and the dialogue are a little 'clunky'. Also Guzman proves to be more convincing as a handsome hulk than a threatening obsessive. However this is an acceptable entry into the category an erotic drama.

The Theory of Everything
Director: James Marsh
Certificate: 12A
Cast Includes: Eddie Redmayne, Felicity Jones, Charlie Cox
A biopic of the early years of the world renown physicist Stephen Hawkins, based on the memoir 'Traveling to Infinity: My life with Stephen Hawkins' by Jane Hawkins. At Cambridge, Stephen Hawkins was an active young man who fell in love with literature student Jane Wilde. However, aged 21, Hawkins had an accidental fall which led to his being diagnosed with motor neuron disease and given just two years to live. The film shows the marriage of Stephen and Jane and how she supported him and their children during the years of their marriage (they divorced in 1995). This is a beautiful film likely to leave the audience in tears. The acting is excellent especially Redmayne's portrayal of Hawkins and the movie shows the lighter side of Hawkin's character, his humour and his passion.
Posted by Unknown at 17:15