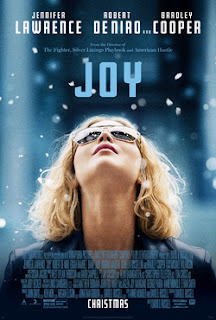 We have just two new releases over the New Year period. There is transexual drama in The Danish Girl (15) and comedy drama with Joy (12A).

Movies that have vanished from the local cinemas include Bridge of Spies and Christmas with the Coopers. In addition the following are approaching the end of their screening: The Hunger Games: Mockingjay Part 2; Sisters; Spectre and The Lady in the Van. By way of compensation the movie Miss you Already is making a return for one day only.

Films coming soon to our screens include boxing drama with Creed on 15th January and Tarantino's western, The Hateful Eight starting the 8th January.

The big draw at the moment is still Star Wars: The Force Awakens though other great drama comes with In the Heart of the Sea. Children's films include Pan; Hotel Transylvania 2 and the excellent Snoopy & Charlie Brown: The Peanuts Movie. In addition there is family entertainment with Daddy's Home.

Period drama comes with Suffragette and The Danish Girl. However there is little high culture on offer during the week.

If planning a visit to the Vue, note that the lift was reported out of action on the 30th December.

In the Heart of the Sea
Director: Ron Howard
Certificate: 12A
Cast Includes: Ben Whishaw, Brendon Gleeson, Benjamin Walker, Cillian Murphy
A film based on a non-fiction book by Nathaniel Philbrick. It is set in the winter of 1820 when the whaling ship the Essex sets sail. Finding the local whaling ground is depleted, the ship ventures into the Pacific Ocean. Here prey is bountiful, but a massive sperm whale seeks vengeance against the hunters. It attacks the ship and the crew take refuge on a tiny island where they face the prospect of starvation. Hence they have little option but to take to the seas again to face the hardships and privations of an extended voyage to return home. This is a gripping film with convincing special effects and plenty of action, though somewhat lacking in suspense. An entertaining sea-fairing yarn.

Joy
Director: David O Russell
Certificate: 12A
Cast includes: Jennifer Lawrence, Robert De Niro, Diana Ladd
A semi-fictional biographical comedy drama about a mop, or how Joy Mangaro (Lawrence) became a millionaire. Joy is a divorced mother with two children, living with her extended dysfunctional family who all depend upon her. In the early 1990s she invents and markets the Miracle Mop. This becomes a great success, selling on a TV shopping channel. Her grandmother Mimi (Ladd) is always supportive of her, and it is she who supplies the narration during the film. The movie has a strong cast and Lawrence provides an exceptionally strong performance. There are some laugh out loud moments during the movie though at times it seemed a little flat. A good, but not a great film.

Miss You Already
Director: Catherine Hardwicke
Certificate: 12A
Cast includes: Drew Barrymore, Toni Collette
Milly (Collette) and Jess (Barrymore) are lifelong friends though their lives are very different. Milly works as a PR executive. She is married to a rock star and has a perfect family. Jess however has a more mundane job and is desperate to have a baby. Milly's life however is thrown in turmoil when she is diagnosed with breast cancer. The film follows her fight with cancer and the stresses it puts on her relationship with Jess who finally conceives a baby. This is a passable movie which provides something of an emotional rollercoaster ride.

Pan
Director: Joe Wright
Certificate: PG
Cast Includes: Hugh Jackman, Levi Miller, Amanda Seyfried, Kathy Burke, Garrett Hedlund
A prequel to the story of Peter Pan. Peter (Miller) is abandoned by his mother and brought up in an orphanage run by Mother Barnabus (Burke). He is captured by pirates and taken to the magical world of Neverland where he is forced into slave labour by Bluebeard (Jackman). Peter and his friend James Hook (Hedlund) manage to escape to the forest where Peter befriends the fairy Tinker Bell. The fairies fight and defeat the pirates and Hook becomes captain of the Jolly Roger ship. A rather bland and somewhat contrived movie.

Sisters
Director: Jason Moore
Certificate: 15
Cast includes: Tina Fey, Amy Poehler, James Brolin, Dianne Wiest
Maura (Poehler) and Kate (Kay) are very different sisters. Maura is the sensible one, now divorced, whereas Kate is excitable and prone to tantrums. They are summoned back to their parents house to clear out their childhood bedroom in one weekend as their parents Bucky (Brolin) and Deana (Wiest) are about to sell the home. The sisters decide to mark the occasion by hosting a party for their high school friends, but find things get rapidly out of hand. There is some crude language and sexual content in this movie and some some of the gags feel a little laboured. However the whole is a cracking comedy giving an emotional roller coaster ride.

Spectre
Director: Sam Mendes
Certificate: 12A
Cast includes: Daniel Craig, Ralph Fiennes, Christopher Waltz, Andrew Scott
The latest James Bond Movie. M engages in a political battle to keep the secret service, in the light of a plan by Max Denbigh (Scott) to replace the 00 program with computer surveillance. Bond meanwhile is trying to locate Franz Oberhauser (Waltz), the suspected head of the evil organisation 'Spectre'. The movie starts in Mexico during the Day of the dead celebrations and thence the action continues in London, Rome and Morocco. There are numerous over the top action sequences, car chases, a good assortment of scary villains and exotic love interest. However amid this harshness, the movie contains a good level of humour. Tension builds from the very start, though some of this starts to dissipate as the film progresses. This is James Bond from the classic mould and Daniel Craig delivers a great performance.

The Danish Girl
Director: Tom Hooper
Certificate: 15
Cast includes: Eddie Redmayne, Alicia Vikander, Ben Whishaw
The film is based on a novel by David Ebershoff and inspired by the lives of Dutch artists Lili Elbe/Einar Wegener (Redmayne) and Gerda Wegener (Vikander). Set in the mid 1920's Gerda is a portrait painter, but a sitter is late for an appointment. Hence Gerda gets her husband Einar to stand in for the missing female sitter. This has consequences. Einar has been harbouring a disire to become a female and the finished portrait attracts favourable attention from art dealers. Einar decides to permanently convert to his alter ego Lili Elbe and becomes one of the first people to received a surgical sex realignment procedure to change from a man to a woman. The movie follows both the artists as they come to terms with the change from Einar to Lili. A serious movie, well acted and well received that highlights the issues of gender reassignment.

The Hunger Games: Mockingjay Part 2
Director: Francis Lawrence
Certificate: 12A
Cast includes: Jennifer Lawrence, Woody Harrelson, Josh Hutcherson, Liam Hemsworth, Elizabeth Banks, Donald Sutherland
The concluding part of The Hunger Games series, based on the novels by Suzanne Colins. The movie continues from the previous film. Katniss (Lawrence) is recovering from battle, but she rejoins her comrades to bring the revolution to the Capital and President Snow (Sunderland). The Capital however is now peppered with booby traps awaiting for them. The film seems to move at a slightly slower pace than the previous instalments as there is a political element to the plot. Acting is very convincing, the special effects are spectacular and the plot has a good number of twists and turns. An excellent and emotional movie that provides a satisfying and worthy conclusion to the Hunger Games franchise.

The Lady in the Van
Director: Nicholas Hytner
Certificate: 12A
Cast includes: Maggie Smith, Alex Jennings
A true story, adopted from 1999 West End Play of the same name and filmed on location in North London. In 1974, Miss Shephard (Smith) is a woman looking for somewhere to park after being moved on the council. Playwright Alan Bennett agrees to her parking her van (which is also her accommodation) in his drive for a couple of days. However Miss Shephard then lived in the drive for the next fifteen years and the film shows the relationship between Bennett and his nuisance neighbour. This is a warm, charming and thoroughly fun movie.
Posted by Unknown at 17:12