Police are investigating the serious assault of an 85-year-old woman in Heysham.

Officers were called by the ambulance service at around 11.45am today (Thursday 18 June) to the report of a woman suffering a serious head injury after being assaulted by a man with what is thought to be a paving stone at an address on School Road.

She was unconscious and taken to Royal Preston Hospital by air ambulance for treatment. Her condition is described as serious.

A 57-year-old man from Heysham has been arrested on suspicion of attempted murder and is currently in police custody.

Posted by John Freeman at 23:19 No comments: 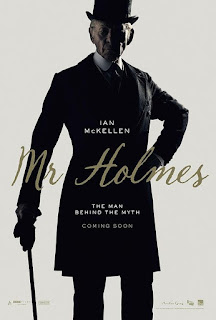 Fathers in the frame in Lancaster: Specsavers is on the hunt for specs-wearing superstar dads

Families in Lancaster are being encouraged to enter their much-loved dads in the Spectacle Wearer of the Year Awards, a competition that celebrates glasses wearers nationwide.

By simply sharing a selfie in their specs at www.specsavers.co.uk/loveglasses, dads could be in with a chance of winning £10,000 in cash and a dream stay at the Atlantis Paradise Island, Bahamas.

The prize will be presented later this year by former Spice Girl and Heart FM DJ Emma Bunton at a star-studded event in central London in October.

Shay Martin, 64, a former finalist and winner of Ireland’s Spectacle Wearer of the Year, says: ‘When I was invited to the grand final I was over the moon. My glasses are an important part of who I am and taking part in a competition that celebrates specs and glasses wearers was the best of fun.

‘As a father, grandfather and proud glasses wearer I think everyone should get involved this year, young, old and everything in between. It’s a fantastic night out for you and your loved ones and a great way of celebrating your glasses!’

Martin Jeffery, store director of Specsavers Lancaster, says: ‘We know that guys can be a little shy when it comes to shouting about how great they look. This Father’s Day we wanted to get families to put their dads forward to be in with chance of a once-in-a-lifetime prize.’

For every eligible entry, Specsavers will donate £1 to Kidscape, which is celebrating 30 years of helping vulnerable children in 2015. The money raised will help to support them in providing training, support and advice for children, parents, schools and those who may be affected by cases of bullying and abuse in the UK.

There are five age categories – 16-24, 25-34, 35-44, 45-59 and over 60s plus a Facebook favourite voted for by the public. A winner from each category will win a VIP makeover and will mingle with celebrities at the awards ceremony in London.

• To be in with a chance of scooping the biggest accolade in the specs-wearing world, glasses wearers can enter the competition online at www.specsavers.co.uk/loveglasses, or alternatively at your nearest Specsavers store.
Posted by John Freeman at 10:09 No comments: 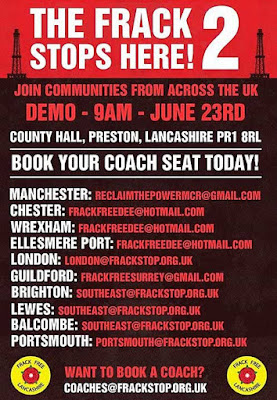 Lancashire County Council has published its officers' recommendations on the applications by oil and gas company Cuadrilla to explore for shale gas at Preston New Road and Roseacre Wood, by drilling, hydraulically fracking and testing the flow of gas, and for monitoring their operations.

The officers' reports can be viewed on the Lancashire County Council website here (as Items 7 & 8).

Roseacre Wood: Recommended for Refusal
The application for Roseacre Wood has been recommended for refusal for the following reason: The proposed development would be contrary to Policy DM2 of the Joint Lancashire Minerals and Waste Local Plan – Site Allocation and Development Management Policies in that it would generate an increase in traffic, particularly HGV movements, that would result in an unacceptable impact on the rural highway network and on existing road users, particularly vulnerable road users and a reduction in overall highway safety that would be severe.

Associated applications have also been submitted for monitoring arrays. The monitoring arrays are designed to monitor seismic movement and water quality. These applications have been recommended for approval subject to conditions controlling time limits, working programme, site operations, times and hours of working, highway matters, protection of public rights of way, drainage, noise, protection of trees, ecological and archaeological protection, restoration and aftercare.

Council Restricted
The Council's Officers explained in their previous reports on these applications that they are not permitted to consider any issues which should be regulated by other agencies, such as the Environment Agency or the Health and Safety Executive.  They were not permitted to consider the track record record of the applicant. Despite repeated requests, the County Council has still not been permitted to see the unredacted version of the government's report on the potential economic impacts of fracking.

Government pressure
In keeping with the government's policy of fast-tracking fracking, regardless of local concerns, Chancellor George Osborne made it clear in his letter to government ministers that Cuadrilla's demands were to be expedited and that pressure was to be applied to Lancashire County County Council to ensure it understood what was required of it. The Chancellor's letter further explains that if the DCC refuses the applications, Cuadrilla will appeal and the final decision will be taken by the Secretary of State.

National Demonstrations in Preston
On the first day, Tues 23 June (and on subsequent days), concerned communities from around the UK will descend upon Lancashire County Hall on Fishergate in Preston for a peaceful show of solidarity and resistance. Lancaster people will be travelling down by train and coaches are organised from around the UK (see contact info poster to book seats from further afield). See Frack Free Lancashire on facebook for updates and 'The Frack Stops Here! 2' event page (and second event page).

Natalie Bennet, leader of the Green Party will be coming to present opposition to the applications on Wednesday 24 June (see event page) and activities are planned for all four days.

Posted by Chris Satori at 00:06 No comments: