Independent Lancaster Looks Ahead, putting Lancaster Floods Behind It 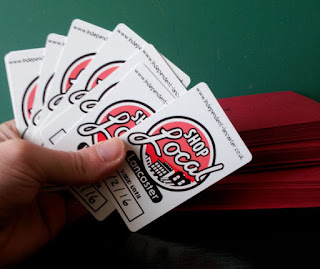 It’s been very nearly a full year since Independent Lancaster first launched its Loyalty Card and it's now grown to over 60 businesses supporting the card and hundreds of local people using it.

The aim of the project is to promote independent businesses and encourage people to shop locally and the team are hoping for a much better 2016, after a rather soggy and miserable end to 2015.

"Lancaster battled through power cuts and flooding in the run up to Christmas and many of our lovely independent businesses were affected, and are still affected, as a result of this," says a spokesperson. "Places including Go Burrito on Church Street which was badly flooded, as was The Fig Tree in St John’s Church. Studio Arts also suffered stock damage and food establishments throughout the city that were untouched by the floods still lost all of their chilled and frozen stock as well as many of them being unable to open again at what would have been some of their busiest nights of the year.

"Even businesses that had survived both the waters and the loss of power met with misfortune, the lovely alternative clothing shop Ahoy on Middle Street was broken into and burgled on Christmas Eve.

"These have been difficult weeks for our city and we don't want to dwell on those gloomy moments except only to reflect on the fact that, during that surreal period in time, we learned that the people of Lancaster are very resilient, supportive and kind. The phrase 'Blitz spirit' has been used a great deal to describe the actions and behaviour of Lancastrians following the flooding as they pulled together to help their friends and neighbours."

Now the immediate panic of cooking by candlelight is behind us, the Independent Lancaster team say we still need to maintain that sense of togetherness and show our support for the local independent shops in the city.

"We make purchasing decisions every day and even something as small as where you choose to buy a cup of coffee makes a difference to your community. There are independent businesses available to cover a wide variety of goods and services, and as we launch into a new year, you might be considering some home improvements?"

These businesses all support the Independent Lancaster loyalty card, so why not consider them when you’re making your plans?

And if your body isn't quite back to temple condition yet after the Christmas season, there are some fitness, beauty and massage businesses accepting the loyalty card too:

If you haven't got an Independent Lancaster Loyalty Card yet, get one here - or renew your current one here


Unless otherwise stated all discounts are not in conjunction with any other offer. Offers have been repeated here in good faith. Business transactions entered into with any businesses listed on behalf of Independent Lancaster are in no way associated with or endorsed by Independent Lancaster which cannot be held liable for any faults or issues with the goods or services received.
Posted by John Freeman at 15:08