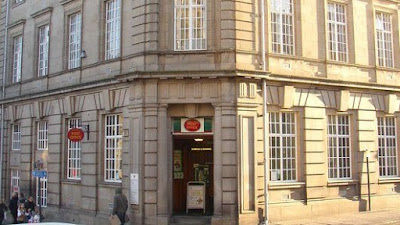 Campaigners have launched a petition to protest at plans to close Lancaster's Crown Post Office on Fenton Street and move services into a city centre store.

Nearly 40 of the UK's Crown Post Offices across the UK could be shut down due to a decision made by Post Office Ltd to save money and make more profit at the expense of much needed services.

Lancaster has been selected as one to be closed and moved to a new franchise site and the petition has been launched just as Post Office workers nationally were hit with a second shock announcement with the news that the company plans to close their defined benefit pension scheme.

Meanwhile, a consultation is also in progress over plans to close the Post Office on Noel Road in Skerton and move it into the nearby Londis store. Staff running the current Post Office will lose their jobs.

Virtual-lancaster understands that he proposal has been announced fait accompli and the consultation is little more than a paper exercise.

"The Post Office in Lancaster has served its customers for almost 100 years and it is the heart of our town centre and should not be sacrificed for greed and profit," argues petitioner Simon Quill.

"The Lancaster Post Office underwent a refurbishment which brought it into the 21st century to meet today's needs. The Post Office is a public service, designed to give wonderful customer service, which the counter staff at our branch have always given.

"We must fight to keep our Crown office open. This service belongs to the people of Lancaster. Don't let greed take it away from us."

The Post Office claims losses in the network of Crown Post office branches had been reduced from £46m a year in 2011/12 and that part of its network was now breaking even, but limited opportunities for growth and high property costs in some locations meant some branches would not be able to make money, it added.

Roger Gale, the general manager of the crown post office network, said: “In some locations, directly run crown post office branches work well, but in others there are alternatives, such as franchising, which can work better for the business and its customers, not just in terms of access to post office services but also in relation to long-term viability.”

Unions have condemned the plans which will mean the loss of hundreds of jobs across the UK.

“The Post Office should never have been split from Royal Mail – natural synergies and public services have been sacrificed for greed and profit.

“The people of this country need to be made aware of these plans and the fact that the Government and the Post Office have no future ambition for the Post Office network. “The whole of the CWU stands united behind our Crown Post Office members, in defence of jobs and the future of the network – and to bring all of the People’s Post back together.”

Brian Scott, who represents Post Office workers at the Unite trade union, said: “This announcement by the Post Office is a slap in the face for Unite members, who have worked extremely hard over the past few years to eradicate losses.”

• The Lancaster Guardian has a report on the planned closures here

• Read the CWU report on the privatisation plans which they condemn as "blatant privatisation"
Posted by John Freeman at 10:54