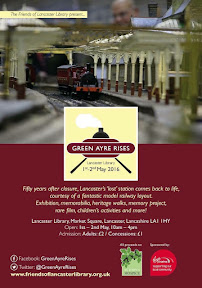 Today and tomorrow (1st-2nd May 2016), Lancaster Library will host "Green Ayre Rises"; an event to mark 50 years since the closure of Lancaster Green Ayre station and the Green Ayre railway line.

Organised by the Friends of Lancaster Library and local business man David Chandler, the centre-piece is the exhibition of a 40'x20' model railway of the long-since demolished Green Ayre station, which, as we've previously reported, model-maker Jamie Guest and members of the Wakefield Railway Modellers' Society have been building for the last six years.

There will be displays of archive material relating to railways in the local area, a reunion of those who worked on the line, guided walks of the railway route and activities for children.

As well as the events in Lancaster Library, there will also be heritage tours of Lancaster station, courtesy of Virgin Trains.

All proceeds from the event will be donated to St.John's Hospice in Lancaster.

It promises to be a memorable occasion, as for one weekend, Lancaster's lost station of Green Ayre rises once again!

• Further details can be found at: www.friendsoflancasterlibrary.org.uk