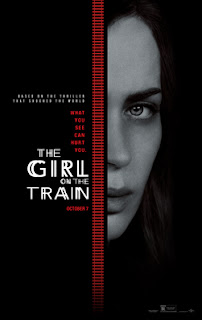 There are four new movies on offer during this period. There is Woody Allen's romantic comedy Cafe Society (12A); a drama based on the recent oil spillage in Deepwater Horizon (12A). In addition there is family fantasy in Miss Peregrine's Home for Peculiar Children (12A) and finally a suspense drama The Girl on the Train (12A). In addition we see the return, for one day only, of Star Trek Beyond.

Movies that have disappeared from the screens include Bad Moms; Ben-Hur; Ghostbusters; Jason Bourne and The Neighbour. In addition the following appear to be coming to an end of their screening: Kubo and the Two Strings; Lights Out; Pete's Dragon; Nine Lives; The BFG and War Dogs.

Family entertainment this period comes with the old favourites Finding Dory; Ice Age: Collision Course; Kubo and the Two Strings; Nine Lives; Pete's Dragon; The BFG and The Secret Lives of Pets. In addition we have the new additions of Miss Peregrine's Home for Peculiar Children and the animation Porco Russo.

Drama this period comes with Bridget Jones's Baby; Deepwater Horizon; The Girl on the Train; The Magnificent Seven and War Dogs. In addition there is science fiction with the pioneering 1950's Forbidden Planet and the return of Star Trek Beyond. Finally horror comes with Blair Witch; Don't Breathe; Lights Out and zombie action in The Girl with all the Gifts.

For adult humour there is the animation Sausage Party.

Films featuring cult musicians come with The Beatles: Eight Days a Week and The Man who fell to Earth.

The Girl on the Train
Director: Tate Taylor
Certificate: 12A
Cast includes Emily Blunt, Haley Bennett, Luke Evans, Justin Theroux
A movie based on Paula Hawkins best selling 2015 novel of the same name. Rachel (Blunt) is an alcoholic who recently divorced her husband Tom (Theroux). She commutes every day by train and on her journey she fantasises about the seemingly perfect couple Scott (Evans) and Megan (Bennett) Hipwell who live in a house that she passes. Rachel witnesses something shocking on her journey and then hears Megan Hipwell is missing. She tells the police and starts her own investigation. Yet she cannot remember where where she was on the night of Megan's disappearance, and Megan and Scott are neighbours of her ex husband. Hence Rachel find the police start to suspect she is involved in the mystery. This is a well acted first rate mystery with a plot that provides a good number of unexpected turns. A must-see movie.

The Secret Life of Pets
Director: Chris Renaud, Yarrow Cheney
Certificate: U
Cast Includes: Louis C.K., Ellie Kemper, Eric Stonestreet, Kevin Hart
A family animation film that follows the lives of pets living in a Manhattan apartment building during the time their owners leave them alone. Max (Louis) is a rather spoilt terrier who starts to find himself neglected when his owner Katie (Kemper) brings home Duke (Stonestreet), a mongrel, from a dog pound. However the two dogs must put their rivalry behind them when they are captured by Snowball (Hart) a rabbit and an army of abandoned pets who are trying to get back at all happily owned pets and their owners. This is a delightful and energetic animation movie that is inoffensive and fun for all, young and old.
Posted by Unknown at 18:15