Heysham to M6 link road will be named The Bay Gateway


The official name for the new Heysham to M6 Link Road is The Bay Gateway, chosen by the public.

More than 9,000 votes were cast, with The Bay Gateway taking almost half of all votes.

The official name for the new route, also known as the A683, will be used to describe the road and will feature on signposts, maps, and Sat Navs.

More than 100 suggestions ("White Elephant" was quickly discounted, we imagine) were given for the official name of the long-awaited new road, which is due to open later this year. And they were whittled down to the four choices for the public to vote on.

County Councillor John Fillis, cabinet member for highways and transport, said: "Morecambe Bay is one of the most well-known and best loved parts of our county. The new road will bring people to the bay, so it seems a very fitting choice for the name.

"The name will start to appear on Sat Navs, maps and signs, making this an important landmark in this major project.

"Thank you to everyone who took the time to vote. It's generated a lot of discussion about people's favourites.

"I'm looking forward to being able to travel along The Bay Gateway when it opens later this year."

County Councillor Jennifer Mein, leader of the county council, said: "The Bay Gateway will bring new commercial opportunities, especially for the port and for businesses based around Morecambe and Heysham.

"This long-awaited new road will make the area more appealing for businesses by reducing travel times and increasing connections to the regional and national road network. It will also reduce congestion and help people to get around the area, opening up new job opportunities.

"We're delighted to see the progress on the road so far, and we're now looking forward to seeing The Bay Gateway open later this year."

Work on the Lune West Bridge is progressing well, with six out of the 13 concrete pours now complete. The cladding on the canal bridge arch has finished, and the Beaumont Roundabout near the A6 is ready for surfacing.

Landscaping work is continuing and top soil is currently being put down.

The Heysham to M6 Link Road is being constructed by Costain. Construction began in January 2014, with more than 1.7m cubic metres of earth moved so far.

The new £124.5m link road will complete the connection from the Heysham peninsula directly to the M6, providing better access to Morecambe and industrial areas which include the Port of Heysham and the Heysham power stations.

Heysham port, the third largest in the North West, is developing as a hub for services to Ireland. It is the supply base for major offshore gas fields and wind farms.

The County Council remains adamant the road will reduce congestion in the Lancaster area especially on Caton Road, Morecambe Road and the Greyhound and Skerton bridges.

The main part of the scheme involves constructing a 4.8km dual carriageway from the A589 between Morecambe and Lancaster to an upgraded Junction 34 on the M6, with additional measures to improve transport in the city.

In related news, Morecambe MP David Morris has asked if the Government will consider "trunking" the new Heysham M6 Link Road (which is nothing to do with white elephants). He says trunking a road recognises it as a strategic route and lifts it out of the category of a local road and into the responsibility of the Highways Agency.

• For updates on the work, follow @Heysham_Link on Twitter or visit www.lancashire.gov.uk/heyshamlink
Posted by John Freeman at 09:50 No comments:

Samaritans will be offering armed forces staff and their families tailor-made confidential support services round the clock, wherever they are in the world, Chancellor George Osborne announced in this week’s Budget.

The charity will receive £3.5m over three years to develop a national programme that helps military personnel , veterans and their loved ones identify when someone may need emotional support, and access Samaritans’ services more easily, whether they are in the UK or stationed overseas.

The money is coming from what’s known as the LIBOR fund, following the rate-fixing issue, where fines paid by the banks are passed on to the voluntary sector.

There will be three elements to the national programme:


Suicide is the biggest killer of men under 50 in the UK, and of men and women aged 20-34. For men who are 24 or younger and have left the armed forces, the risk of them taking their own lives is between 2 and 3 three times higher than men the same age who haven’t served in the military.*

“We rely on men and women in the armed forces to put their lives on the line to keep us safe," said Director of Lancaster and District Samaritans, Jenny Digton, welcoming the Chancellor’s announcement.

"With this funding, Samaritans can share its expertise with the military so that those serving or leaving the forces and their families are better equipped to deal with their unique circumstances, as well as the day to day struggles that we all face.

“Lancaster and District Samaritans are already here for anyone who is struggling, including those in the military. This funding will enable Samaritans nationally to share their expertise and give service men and women vital skills in listening and supporting others that they can use in their careers and later in their civilian lives.”

Samaritans has a track record in tailoring its services to the needs of those who may be more at risk of taking their own lives. For example, it has developed a listening scheme in prisons, which is now in its 25th year, where inmates are trained in listening skills and offer emotional support to prisoners finding it difficult to cope. We offer this service at Lancaster Farms.

Since 2010 Samaritans has been working with Network Rail and the wider rail industry’s 200,000 staff to develop online and face to face training in the skills needed to identify anyone who may be vulnerable, keep them safe, and direct them to sources of support such as Samaritans.

Posted by John Freeman at 08:45 No comments:

Extra Time for Lancashire's Threatened Museums, will Culture Inquiry Save Them Yet? 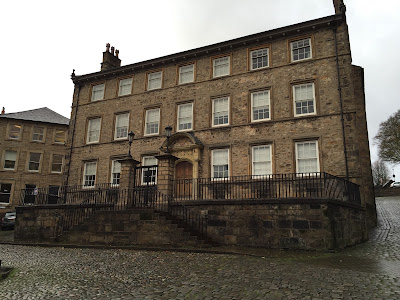 The five Lancashire County Council museums threatened with closure will now stay open until the end of September, to allow more time for discussions to continue with organisations keen to take them over, and for other interested parties to come forward.

Lancaster's Judges' Lodgings is one of the five museums earmarked for closure as the result of the swingeing cuts to council funding by central government, which have now gone well beyond simple economic prudence and sensible cost savings and into the realms of a brutal right wing attack on public services at the expense of anything not perceived to make a 'profit' (such as museums, schools, the disabled, the poor and the arts).

County Councillor Marcus Johnstone, Cabinet Member for Environment, Planning and Cultural Services, said: "As has been widely reported, the county council's dire financial situation means that we can no longer afford to run these museums.

"We took the decision to cease funding these five museums with very heavy hearts. We recognise their immense cultural and historical value but when it is unclear how we will pay for essential services for the vulnerable in just two years' time, it is one of many difficult decisions we have had to make.

"I am pleased to say that we are in active discussions with bodies interested in taking over all five museums, and we will keep the museums open until the end of September to give those discussions the best possible chance of success. It may also present an opportunity for other interested parties to come forward."

The five museums facing closure because of the Tories are:

Tax changes in this week's Budget may help all museums survive in future. Chancellor George Osborne has extended the museum VAT refund eligibility from national and university museums to include free museums across the country.

Museums Heritage Advisor reports this will allow all free museums and galleries to claim back VAT incurred on most goods and services purchased in order to continue to offer free admission. The budget will also see tax relief for temporary and touring exhibition costs from April 2017 with a consultation taking place in the summer.

Friends of the Judges' Lodgings Group


One community-based group looking to save Lancaster's threatened museum is
the Friends of the Judges' Lodgings.

The group has recently become focussed on thinking strategically about how it might assist in saving the Judges' Lodgings from closure and are interested in talking to anyone who might like to get involved.


Although things are looking grim for these five museums, there is a glimmer of hope that the recently-announced Culture, Media and Sport Committee inquiry into funding for culture in England’s regions and sub-regions might highlight the impact funding cuts are having on museums and the arts around the country.

The Countries of Culture inquiry will focus on the impact on culture of the local authority settlement; new funding models for culture and use of lottery funding; cultural partnerships; skills, management and infrastructure; accessibility and engagement; and the value and impact of culture in the regions.

The select committee’s last inquiry in 2014, into the work of Arts Council England, found that there is an imbalance in arts funding in favour of London at the expense of taxpayers and lottery players in other parts of the country.

This year’s inquiry aims to build on that report and look beyond the work of the arts council.

“The UK has huge cultural and artistic riches in its regions and nations, including galleries, museums, music, theatre and festivals,” says Jesse Norman, the chair of the select committee. “This inquiry will look at how best to preserve and enhance those resources, especially in the face of continuing budget pressures; at the impact of festivals and events in cultural regeneration; at enhanced linkages between national and regional institutions; and at new ways in which culture and the arts can be used to develop and revitalise communities.”

The Museums Association’s (MA) Cuts Survey 2015 found that: “Local authority museums are particularly at risk and have experienced a greater decrease in total income from 2013-14 to 2014-15 than other types of museum. And the funding position of local authority museums is likely to worsen following the substantial cuts to the local government grant announced in the 2015 spending review.”

The MA will be giving evidence to the inquiry, and is calling for regional museums to make submissions to make sure the sector’s voice is heard.

“The MA welcomes the select committee inquiry into regional culture funding. Regional museums face a looming crisis with many under threat of closure,” says Sharon Heal, the MA’s director.

“If we are to prevent whole areas of the country becoming cultural cold spots there needs to be an urgent debate about how national and local government can work in partnership to ensure the continued provision of these vital services for current and future generations.

“The MA will be giving evidence to the inquiry and welcomes submissions from regional museums in England to ensure that our collective voice is heard.”

The deadline for submissions is 22nd April 2016.

Opening times may be subject to change at short notice. Visitors are advised to check before their visit at www.lancashire.gov.uk/museums