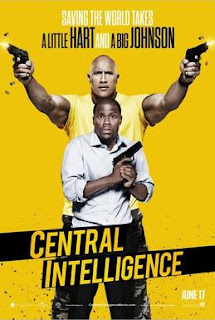 Seven new releases make to the local screens this week. There is Drama with Measure of a Man (15); Our Kind of Traitor (15) and Suburra (18). Comedy is provided with Central Intelligence (12A); family animation comes with Finding Dory (U) and musical drama with Sing Street (12A). Finally science fiction action is provided by Independence Day: Resurgence (12A).

The following movies have been dropped: Eddie the Eagle; London has Fallen and Robinson Crusoe. Also Mother's Day is drawing to the end of its screening. However by way of compensation we welcome the return of military action with Eye in the Sky and family entertainment with Kung Fu Panda 3 and Thomas and Friends: The Great Race.

Movies coming in July include Absolutely Fabulous; Batman: The Killing Joke; Ghostbusters and The BFG.

The big draw this week is the alien invasion in Independence Day: Resurgence and the Vue are offering an Independence double bill on 22nd June. Other science fiction/fantasy movies on offer include Captain America: Civil War; Gods of Egypt; Warcraft: The Beginning and X-Men: Apocalypse.

There is a particularly wide selection of family oriented entertainment on offer with Alice through the Looking Glass; Kung Fu Panda 3; Long Way North; Spirited Away; Teenage Mutant Ninja Turtles 2; The Angry Birds Movie; The Jungle Book and The Secret Life of Pets.

For adult entertainment, there is comedy in Bad Neighbours 2; Central Intelligence and The Boss. In addition there is the feel good movie Mother's Day and romance with Me Before You. There is drama with Eye in the Sky and Measure of a Man; comedy drama with The Nice Guys and the musical drama Sing Street. Finally horror comes with The Conjuring 2 and the adult fairy tale in Tale of Tales.

High culture is represented with ROH: Werther and The Importance of being Earnest. Finally, for a good sing-a-long, there is Calamity Jane.

Bad Neighbours 2
Director: Nicholas Stoller
Certificate: 15
Cast includes: Seth Rogen, Rose Byrne, Chloe Grace Moretz, Zac Efron
A sequel to the 2014 Bad Neighbours. Mac Radner (Rogen) and his wife Kelly (Byrne) are expecting their second child. They are in the process of selling their old house when a newly established female sorority, Kappa Kappa Nu led by Shelby (Moretz), moves into the house nextdoor. Excessive partying on the part of the sorority makes life a nightmare for the Radner's and will jeopardise the sale of their house. Their requests for the girls to keep the partying quiet lead to an all out war. Teddy (Efron) from the previous film has not coped well outside of college and he is enlisted by the Radner's to be their ally in the battle with the sorority. This movie is little more than a re-run of the first Bad Neighbours, but the film still has more than its share of very funny moments. Good entertainment.

Mother's Day
Director: Garry Marshall
Certificate: 12A
Cast includes: Jennifer Aniston, Shay Mitchell, Kate Hudson, Britt Robertson, Julia Roberts
Set in Atlanta, the film follows the lives of a number of middle class mothers as mother's day approaches. These include Sandy (Aniston) a mother of two boys who is now divorced but finds her ex is about to marry a younger woman Tina (Mitchell). There is a writer Miranda (Roberts) who gave her only baby Kristen (Robertson) up for adoption. However, when grown her daughter decides to try to find her birth mother. Yet more people give rise to a bewildering set of sub-plots that play out leading to a climax on Mother's Day. Despite a star studded cast, and some gags that work, this comedy drama never really takes off and the movie has received poor critical review.

The Conjuring 2
Director: James Wan
Certificate: 15
Cast includes: Vera Farmiga, Patrick Wilson, Frances O' Connor, Madison Wolfe
A sequel to the 2013 film 'The Conjuring'. Lorraine (Farmiga) and Ed (Wilson) Warren are psychic investigators. The hear of a haunting and travel to the UK to help Peggy Hodgson (O'Connor), a single mother of four, who is plagued by poltergeist activity in her London council house. However things get worse when Peggy's youngest daughter Janet (Wolfe) shows signs of daemon possession. The psychic investigators come to find themselves in peril. A superior horror movie which provides plenty of frights and has been well received.

The Secret Life of Pets
Director: Chris Renaud, Yarrow Cheney
Certificate: U
Cast Includes: Louis C.K., Ellie Kemper, Eric Stonestreet, Kevin Hart
A family animation film that follows the lives of pets living in a Manhattan apartment building during the time their owners leave them alone. Max (Louis) is a rather spoilt terrier who starts to find himself neglected when his owner Katie (Kemper) brings home Duke (Stonestreet), a mongrel, from a dog pound. However the two dogs must put their rivalry behind them when they are captured by Snowball (Hart) a rabbit and an army of abandoned pets who are trying to get back at all happily owned pets and their owners. This is a delightful and energetic animation movie that is inoffensive and fun for all, young and old.
Posted by Unknown at 16:54 No comments: