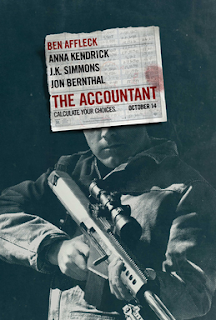 In this period we see the arrival of just one new release, but two movies have been lost. The new movie is the science fiction drama Arrival (12A) in which alien spacecraft arrive on the earth. The films that have been lost are Miss Peregrine's Home for Peculiar Children and The Secret Life of Pets.

The following movies seem to be approaching the end of their screening: Don't Breathe; Inferno; Pete's Dragon and The BFG. However by way of compensation we see the return of the family adventure Finding Dory and the fact based drama Queen of Katwe.

For drama this period we have the fact based Deepwater Horizon; life on benefits with I, Daniel Blake and girl escapes poverty in Queen of Katwe.. There is action in Inferno; Jack Reacher: Never Go Back; The Accountant and The Girl on the Train. Crime comedy is represented with War on Everyone and romance comes with The Light Between Oceans. In addition, there is the feel good tale of A Street Cat Named Bob.

Science fiction is represented by the new release Arrival whereas horror this period comes with Don't Breathe; Ouija: Origin of Evil and the supernatural exploits of Marvel hero . Vintage horror comes with a double bill of The Invisible Man and The Wolf Man.

Finally, high culture this period is represented by The Royal Opera: Les Contes d'Hoffmann screened at both the Reel and the Vue. In addition there is the live broadcast of Alan Bennett's Diaries, but unfortunately the latter is sold out.

The Girl on the Train
Director: Tate Taylor
Certificate: 12A
Cast includes Emily Blunt, Haley Bennett, Luke Evans, Justin Theroux
A movie based on Paula Hawkins best selling 2015 novel of the same name. Rachel (Blunt) is an alcoholic who recently divorced her husband Tom (Theroux). She commutes every day by train and on her journey she fantasises about the seemingly perfect couple Scott (Evans) and Megan (Bennett) Hipwell who live in a house that she passes. Rachel witnesses something shocking on her journey and then hears Megan Hipwell is missing. She tells the police and starts her own investigation. Yet she cannot remember where where she was on the night of Megan's disappearance, and Megan and Scott are neighbours of her ex husband. Hence Rachel find the police start to suspect she is involved in the mystery. This is a well acted first rate mystery with a plot that provides a good number of unexpected turns. A must-see movie.
Posted by Unknown at 18:35 No comments:

The Conservatives are campaigning for an electoral boundary change that would split Lancaster right down the middle. See maps, right.

Last week Morecambe MP David Morris wrote to his constituents to tell them that it would be better for their constituency to incorporate half of Lancaster - rather than all of it.

His plans would put the Dukes and the Grand in 'Morecambe'. Splitting the ancient city of Lancaster in half.

The Boundary Commission has been holding consultations for weeks about its own proposals, which would make Lancaster,  Morecambe and Heysham into a single urban constituency. You can see their boundary proposals in the bottom map on the right and in more detail on the Boundary Commission website, where you can also have your say.

As the Lancaster Guardian has pointed out, a leaked Conservative Party counter-proposal to the Boundary Commission's plans shows that they would rather see Lancaster’s Bulk Ward, Caton Road and everything north of the river grouped in with Morecambe and Lunesdale, with the rest
of the City grouped with rural Wyre. (See maps, right).

The local Labour Party are backing the Boundary Commission's proposals, even though it would mean Bailrigg and the University would be in a separate, more rural
constituency (with the loss of all those student votes), because they believe that the three neighbouring urban centres of Morecambe, Heysham and Lancaster have common objectives, and very different priorities to their rural neighbours. They have started a petition in support at www.one-mp.com.

They say that in the very week that the new Bay Gateway road began to make transport and business links between Morecambe, Heysham and Lancaster more fluid, Morecambe's Conservative MP David Morris has been trying to drive a wedge between them and, in doing so, break Lancaster apart.

You can go on the Boundary Commission website here, to look at their proposals, which would unite Morecambe, Heysham & Lancaster into one urban constituency, and tell them if you think that would be better or worse than the Conservative's counter-proposal.


The Mayor of Lancaster is asking primary school age pupils from across the district to design him a Christmas card.

The successful design will be sent to a number of important people on behalf of Lancaster City Council, including Her Majesty the Queen.

The winner will be welcomed to Lancaster Town Hall to meet the Mayor with nine of their friends and family where they will enjoy a tour of the Town Hall and be presented with a framed copy of their design.

For those children wishing to enter the competition their design should:

“I am looking forward to being able to see all the wonderful designs that will be produced by the children of our district for my Christmas card competition,” commented the mayor.

“I am sure that it will be a very difficult decision to make to choose a winner, but am very much looking forward to the challenge.”

• Designs should be sent to the Mayor’s Office, Town Hall, Lancaster, LA1 1PJ.  The closing date is Friday 2nd December 2016

Posted by John Freeman at 15:34 No comments:

How Will Cuts Affect Your School?

www.schoolcuts.org.uk has worked out how government budget cuts (which vary for different local authorities) will affect each individual school.

You just put in your postcode and you have them.

The site used published Department for Education data to calculate cuts to England’s primary and secondary schools over this Parliament, 2015 – 2020.

"We used the 2015/16 funding as the baseline," say the team. "We calculated the impact of the cash freeze on per pupil income, the proposed cut to the Education Services Grant and the proposed introduction of a National Funding Formula. We included a minimum funding guarantee (MFG) as this has been in place since the Government started moving towards a National Funding Formula in 2013/14.

"If and when the Government produces its own formula, the website will be amended in order to provide revised predictions reflecting that formula."