Local Cinema Round-Up for the 1st to 9th February 2017 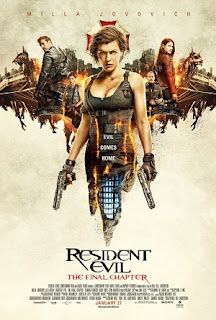 We have gained three new movies this period but six films vanished from the local screens. The new releases are science fiction with Resident Evil: The Final Chapter (15); horror in Rings (15) and comedy animation in the family movie The Lego Batman Movie (U).

Science fiction comes with Arrivals; Resident Evil: The Final Chapter and Rogue One: A Star wars Story. We also have the new horror horror Rings.

On a lighter note, there is still the excellent musical romance La La Land.

For family entertainment consider A Monster Calls; Ballerina; Sing; The Lego Batman Movie; The Secret Life of Pets and Trolls.

Mia (Stone) works as a barista during the day but aspires to be an actress. She is involved in a road rage incident with Sebastian (Gosling) a jazz pianist. The two subsequently meet again and start to fall for each other as they try to satisfy their ambitions, she attending auditions and he playing in dingy bars as he plans to open his own jazz club. However the daily drudge of trying to live their dreams starts to take its toll. This movie, set in modern day Los Angeles, is brilliantly written and very well acted. Excellent musical entertainment.

The movie is a sequel to the 2012 Resident Evil: Retribution and forms the sixth and final film in the series. Alice (Jovovich) has lost her psychic powers and now is assisted by the Red Queen who has switched sides. She returns to the demolished Raccoon City where, with a band of survivors, she has one last battle with the Umbrella Corporation and myriads of mutants and zombies. This reviewer has greatly enjoyed the Resident Evil Movie series and can recommend the Final Chapter as offering more of the same special effects and fight sequences. However the film is not the best of the bunch and the franchise is now starting to feel a little tired. See it if you are a Resident Evil fan.

This movie is set just before the events of the original Star Wars. There are rumours circulating that the Galactic Empire are about to construct a horrendous new weapon, a 'Death Star' designed by Galen Erso (Mikkelson) A small team of rebels led by his daughter Jyn Erso (Jones) and Cassian Ander (Luna) strive to find the designer and steal the design schematics. The movie hosts new and familiar aliens who strive to 'use the force' and it comes with breathtaking special effects. This is more gritty that the familiar star wars offering, more of a war move with a higher body count and more muddied ethics. The movie has been well received and will delight audiences. It breaks new ground from the classic Star Wars, but only just.

Mark Renton (McGregor) returns to Edinburgh after twenty years in Amsterdam and finds his old associates are still much as he left them only older. Spud Murphy (Bremner) continues to struggle with heroin addiction. Simon 'Sick Boy' (Lee Miller) nurses old grievances and has swapped a heroin addiction for cocaine. He plans to turn a run down pub onto a bordello. Francis Begbie (Carlyle) is serving a prison sentence, but he escapes. He still harbours a grievance against Renton. The movie is part black comedy, part thriller and total melancholic drama that draws on Welsh's 1993 novel and the 2002 sequel Porno. This is an inventive and vibrant film that captures the spirit of the original. Excellent viewing.

A family animation film that follows the lives of pets living in a Manhattan apartment building during the time their owners leave them alone. Max (Louis) is a rather spoilt terrier who starts to find himself neglected when his owner Katie (Kemper) brings home Duke (Stonestreet), a mongrel, from a dog pound. However the two dogs must put their rivalry behind them when they are captured by Snowball (Hart) a rabbit and an army of abandoned pets who are trying to get back at all happily owned pets and their owners. This is a delightful and energetic animation movie that is inoffensive and fun for all, young and old.
Posted by Unknown at 20:02