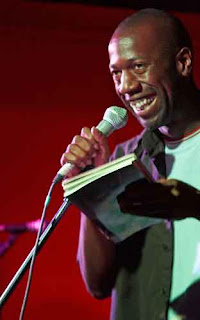 There’s a powerful line-up of poetry and music on offer at next week's Spotlight Club, with some of the area’s top-notch writer’s and performers.

Mark Mace Smith is an itinerant poet currently living in Preston. A professional actor, percussionist, photographer and journalist Mark's poetry has been conversely described as 'Pop Poetry' and 'Dub Poetry' and his body of work is considered to be '...the zeitgeist of social commentary.' That is according to Mark who was born in Lambeth, south-west London (sometime in the 1970s). He studied politics and philosophy and, later, post-graduate journalism at the University of Central Lancashire. He was accidentally elected as Students Union president in 1999 much to his distress.

Mark's first book of poems, A Head Full Of Green, was published in 2006 by Ptooie Press. His second book, Moist Shenanigans, and his first prose volume, Jobseekers Annoyance & Other True Stories, were scheduled to be published in September 2007. He was the Glastonbury Festival Slam Winner 2008. More info at: www.myspace.com/thuddub

Sarah Hymas is currently Publishing Development Manager for litfest, editing Flax Books and organising professional development sessions for writers throughout the North West. A poet and short story writer, Closet Collection was her debut short story collection, back in 1994. Since then her work has appeared in anthologies, magazines, pamphlets, websites, dance videos, brochures, and multimedia exhibits around the UK. Publications include The Rialto, Agenda, British Council's New Writing14, Smith's Knoll, Magma, Orbis, The Slab & Tadeeb.

'Just this past year I have rediscovered a love for puppets and script and perform puppet shows at any occasion that'll indulge me," says Sarah. "These are re-tellings of the classic fairy tales.'

Sarah will be performing poems about the Kraken’s brother and other creatures seen and imagined around Morecambe Bay. More info: www.myspace.com/shymas

Garstang poet Ron Scowcroft's work has been published by Poetry Nottingham, listed for the Bridport and City of Derby poetry prizes and featured on the Guardian Books website. He is currently working on an exciting new project in collaboration with artist Jayne Simpson.

Faster than a sleeping bullet, more powerful than a ukulele, capable of drinking warm beverages in a single bound: Paddy 'Wainscot' Garrigan is a singer, musician, writer and exceedingly amateurish cyclist. Best known for playing guitar and singing in The Pier Group and The Wierdstring Band (and for doing anything but play guitar in The Wisemen), Paddy has contributed a myriad of instruments to ensembles such as Dan Haywood's New Hawks, Moonstone, The Gokarnas, The Puma Sutras, Colonel Blimp & The Amazing Exploding Bananas, and Sonic Tradition. He also performs as a solo artist, and occasionally as a solo group. More info: www.myspace.com/paddygarrigan

Singer, guitarist and artist Harvey Lord says he lives mostly in a caravan has two albums to his name so far: Weighted Down, a collection of acoustic songs and Static which he describes as "a 60 minute experimental piece of music that drones and twists between my ears." Both are available on the Reverb Worship label. More info: www.myspace.com/harveylord

• Spotlight is compered by Simon Baker. The literary parade kicks off at 8.30pm at The Yorkshire House, Parliament St. Lancaster with an Open Mic 8.45 - 9.15pm, at which anyone can perform (contact Spotlight to book a place: spotlightclubATbtinternet.com). Admission: £3/£2 (Conc.).