Learn to Cycle' Courses for Youngsters 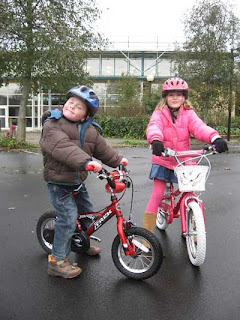 Parents who are thinking of buying their youngsters a new bike for Christmas might want to take advantage of the Lancaster City Council's 'Learn to Cycle' sessions taking place in January.

Normally run as part of Council's Holiday Activities Programme, the sessions proved to be such a big hit with budding cyclists that the council plan to offer bags more at weekends in 2009 - good news given Lancaster's status as a Cycling Town, and what some see as the urgent need to encourage better cycling given how potentially dangerous it can be in some parts of Lancaster.

While statistics suggest that cycling numbers have increased in the area, accidents have decreased overall, but nine adults and two child cyclists were seriously injured on the area's roads in 2007, and 28 adults and nine child cycclists slighty injured in the same period, according to figures published today in the Lancaster Guradian.

Last Thursday 24-year-old labourer Carl Blamire was killed after colliding with a lorry on Morecambe Road. His family are devastated by the tragedy, the circumstances of which are still being investigated. (Police are still appealing for witnesses to come forward, and anyone with information should call Lancaster police on 01524 63333, or Crimestoppers anonymously on 0800 555 111).

The sessions are run by Sustrans Bike It Officer, Kathy Bashford and council cycle trainers at Salt Ayre Sports Centre and will show children who use stabilisers or cannot yet ride how to get started.

Pedals and stabilisers are removed at the start of the two hour session so that the children can learn to balance before they progress to pedaling, By the end of the sessions the council ran in October all the children improved their balance and many of them were able to ride unaided.

"I was very impressed with the 'Learn to Cycle' course that my daughter attended during the school break in October," said Morecambe mother Jackie Sanderson who is keen to recommend the course to other parents. "The instructors were extremely approachable to the children, very patient and provided lots of support and encouragement.

"I must admit that I was very curious to see how they would be able to teach the children how to ride without the use of stabilisers and was amazed that in just under an hour all six children were attempting to cycle!

The next four 'Learn to Cycle' sessions at Salt Ayre Sports Centre will take place on Saturday 17 and Sunday 25 January at 10am - noon and 1pm - 3pm. But you'll have to be quick - sessions are certain to be in great demand by all those who are asking Santa for a new bike this Christmas.

• To book a place contact Lancaster City Council's Cycling Demonstration Town Team on 01524 582392. All courses cost £5 and participants must bring a roadworthy bike, suitable clothes for being outdoors and be accompanied by an adult.

The courses are also offered free of charge to children attending the district’s Bike it schools.
Posted by John Freeman at 09:14