Talking Birds at the Nuffield 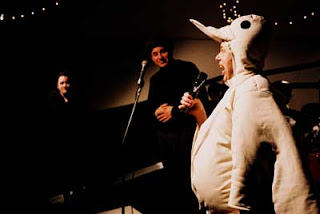 Pioneering theatre company Talking Birds come to the Nuffield, Lancaster this December with a funny, musical, slightly chaotic Christmas show for those who like their seasonal fare skewed and a little bit heartbreaking

Trevor Goose and his Dark Night of Lights attempts to tell the story of The Little Matchgirl, but internal difficulties with the band - Hans Christian and the Andersons – as well as with a Danish tourism officer and a missing celebrity mean the evening soon turns into a painfully amusing spectacle as the cabaret comes face to face with it’s own dark failings.

The music is divine, boasting a fully feathered live band – led by composer Derek Nisbet – and they’ll rip off a series of exhilarating numbers throughout the show. The performance also features a small, but crucial role performed by a specially cast local performer, who will play the part of the mother of one of the band members.

Some shows like to be seen as an antidote to Christmas shows, but who wants an antidote when the venom is this much pleasure?