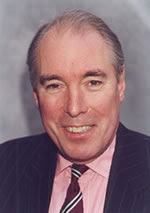 Local MEP Sir Robert Atkins has called for a better labelling regime for processed foods after it emerged that food packaged as "Made in Britain" could contain Irish pork caught up in the diocin alert in the Republic.

At present processed foods containing pork may contain ingredients from all over the European Union or from further afield, yet if they are processed in the UK, the final product can be labelled as being "Made in Britain."

Sir Robert, who is Member of the European Parliament for the North West Region, says he has campaigned for some time to have the principle meat ingredients labelled according to their country of origin to allow people to make an informed choice as to where their food has come from and to make it easier to trace and identify food ingredients in the event of food scares like the one experienced in Ireland this week.

"We're in desperate need of a better labelling system," argues Sir Robert. "If all meat ingredients were traceable, either by way of a barcode or a link to a website which listed them all and their country of origin, it would be far easier to be sure that potentially contaminated meat could be traced in the event of a scare. Otherwise uncertainty reigns and we have the present situation where nobody is quite sure where or how serious a scare actually is.

"Consumers also have a right to know exactly where all the ingredients have come from so that they can be 100% sure that they are buying British if they want to.

"At the moment, some companies seem to use labelling to confuse rather than inform and this needs to stop. Labelling should be clear and should properly inform the customer of what is in that product and where it has come from. Anything less is not only potentially dangerous but stops consumers making an informed choice."
Posted by John Freeman at 17:47