Putting an End to University Research? 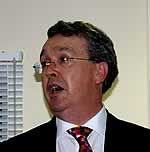 An article in subtext (http://www.lancs.ac.uk/subtext/) notes that Lancaster University Vice-Chancellor Paul Wellings has been advising the government to close down research funding to Lancaster and have it as primarily just a teaching establishment, if one can read clearly between the lines of his recent report to John Denham, Secretary of State for Innovation, Universities and Skills.

Earlier in the year, subtext editors record, Prof. Wellings was approached by Denham to give strategic advice on 'how universities should manage IP for their own benefit and for the wider economy'. Intellectual Property rights relate to the royalties that may be earned by research from its commercial applications. At the end of September the prof delivered his report - the remit letter and final report can be downloaded from www.dius.gov.uk/policy/intellectual_property.html.

An interview with Prof. Wellings published in the Times Higher Education (THE) supplement of 27 November focuses on section four of the report, which dealt most closely with 'the connection between research students and graduate schools and good IP generation and exploitation' (http://tinyurl.com/5m6ln2). In this section he recommends that the government target postgraduate training funds on those institutions with larger graduate schools, which also tend to be those with better records of research commercialisation.

In the THE article the V-C is paraphrased as saying that "the sector should continue to diversify so that by 2020 each Region has just one or two major graduate schools." So in the North West Region, for example, there would presumably be only one or two 'research' universities to take all the research income and all the PhDs, with all the others concentrating on teaching.
The V-C has paid a lot of attention to getting Lancaster University up the League Tables and the University website proclaims Lancaster to be "one of the top 'research star' universities in the UK, with the 3rd highest research income and the 2nd highest number of Phds in proportion to academic staff costs."
However, in the table that accompanies the THE article (available from a link in the right hand column of the online version) Manchester and Liverpool are unsurprisingly identified as the two universities that produce by far the most PhDs in our Northwest Region. Similarly, in a table on pp. 24-7 of the V-C's report, Lancaster comes third after Manchester and Liverpool in the NW on all metrics except IP income, where it is way outstripped by Chester (why is that, by the way?).

The separation of research from teaching is a move that would disembowel the higher education system, making it impossible for the vast majority of students to experience high quality research methodologies. It would, however, mean that all research could be concentrated where it could be more easily monitered, regulated and budget prioritised from a central point according to its commercial viability, with reduced responsiveness to local needs.

Along with many other regional university cities Lancaster would receive a major economic blow from the relegation of the University to a secondary, teaching-only establishment, and would most likely turn its focus to attracting overseas students, less likely to invest their energy into the city. Do the futures of Infolab and the proposed Science Park hang in the balance?
Posted by Chris Satori at 17:20

How does this sit with news this week that Lancaster University is to play a key role in two new training centres that will generate scientists needed for Britain's future through strategic investment in the high-priority area of nanotechnology?

In a press rlease Lancaster University says it is receiving over £1m to expand theoretical research in the novel electronic material graphene (one or two atom thick graphitic layers), as part of a £5m Science & Innovation Award 'Maximising the Impact of Graphene Research on Innovation' shared with Manchester University, where graphene has been discovered by Professor Andre Geim FRS. The competitive Science & Innovation Awards are provided by EPSRC and HEFCE to guarantee the UK leadership in strategic research areas.

Lancaster University is also a partner in the Northwest Nanoscience Doctoral Training Centre (NOWNANO) led by Manchester University. NOWNANO aims to train 100 PhD students (half of those fully funded by EPSRC) who will receive taught courses in materials, nanoscience and nanotechnology and participate in multidisciplinary research projects ranging from the fundamentals of nanoscience to application of nanodevices in engineering and medicine.

Professor Vladimir Falko (Physics) who leads Lancaster's contributions in NOWNANO and the Science & Innovation Award said: ‘The participation of Lancaster condensed matter theorists in the Manchester-led DTC and Science & Innovation Award marks a new era of strategic cooperation between the two leading Universities in the North-West for training postgraduates and performing world-leading research in nanoelectronics, including the recent progress in the fundamental science of graphene and development of graphene-based devices.’

Lancaster is also set to receive around £5m to fund a new Digital Economy Innovation Centre to educate a new generation of PhD students. The funding will enable around 50 PhD students over 5 years to become the innovators of the future - trained to work at the cutting edge of the Digital Economy.