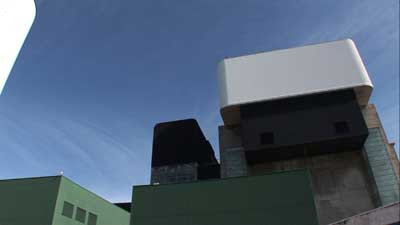 Heysham Power Stations are playing an integral part in Liverpool’s Year of Culture, with the sites featuring in a new video installation by Orchestral Manoeuvres in the Dark frontman Andy McCluskey.

The sites’ management team was approached by Andy two years ago about filming the stations for the video, which also includes other forms of electricity generation from the across the north west.

The unique project, which opens at Liverpool’s FACT centre on Friday 12 December and runs until 22nd February, saw the stylised video images set to original music written by Andy.

“British Energy has a long history of working with the arts communities as our stations are well known within the built environment," says Paul Winkle, station director at Heysham 2. “Recently Torness power station, the sister site to Heysham 2, was part of a Richard DeMarco art exhibition where he staged a show of his work but also projected a specially-shot video image on to the side the reactor building.

“But we were delighted to do our bit for Liverpool, and not only provide the city’s power but also be a part of this exciting cultural experience.”

Renowned video director Hambi Haralambous shot views of the stations inside the perimeter fence and also within the turbine hall. The final video shots were edited and designed by Hambi, Andy and Peter Saville the Manchester-based artist/designer who worked famously with Factory Records and OMD in the 1980s and 1990s.

“The Energy Suite Installation project grew out of a fascination I shared with designer Peter Saville of the aesthetics of industrial architecture," explained Andy. “We have been afforded the opportunity to film these incredible sites and record the sounds of their environment, and now we are able to present them accompanied by music inspired by what we have seen and heard.

“Many people will bring their own pre-conceptions when viewing the Energy Suite, however, I suspect that quite a few will leave the Installation agreeing with Peter's often repeated mantra, 'It all looks like art to me now'.”
Posted by John Freeman at 15:00