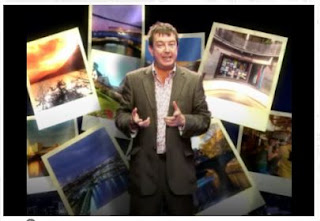 Author Stuart Maconie is currently writing a series of short stories about England's Northwest, from the breathtaking scenery of the Lake District and the cosmopolitan cities of Liverpool and Manchester to historic Chester and the cultural charms of Lancaster.

• Visit www.stuartsstories.com and to read all of the stories, download podcasts narrated by Stuart and register for a free copy of his Short Stories for Short Breaks book.
Posted by John Freeman at 11:31 No comments:

Heroes of She Single Launch at The Dukes 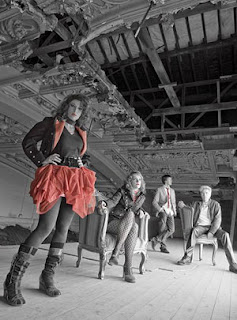 Lancaster band Heroes of She, the winners of the BT competition for the best band in the North West and whose fans include the CEO of one of the world's leading creative organisations, launch their debut single at a special gig at The Dukes, Lancaster, on 20 September.

Heroes of She will launch 'Don't Love Me' as a single, after it was chosen for release by listeners to The Bay radio station in a telephone poll.

The band's debut album, 'Never Going Home', due for release in the new year, from which the single is taken, has already been recommended by top creative industry mogul Kevin Roberts, Chief Executive Officer Worldwide for global advertising agency Saatchi & Saatchi. He lists Heroes of She among his top ten iPod sounds on his blog which is one of the most read on the internet.

Kevin said of the album: "It's hot, sexy and dynamic. Hunt down a copy."

This is the first time a band has played at The Dukes and the event marks the launch of The Duke's new stage, The Round, as a music venue.

"This is a very special occasion," explained James Mackie, Hammond organ player with Heroes of She. "Not only do we launch our first single but we are also proud to be the first band to play The Dukes as part of its programme of events. We're really looking forward to playing in the newly-refurbished Duke's space, The Round, Lancaster's newest music venue.

"The Round itself launches on 18 September – just two days before the Heroes of She event. It'll be a great night with two other fab acts on before we hit the stage!"

The four members of the band write and perform their own explosive contemporary material, using Hammond organ where guitars would normally be, and cite their influences as diverse as mid-60's Beat music, The Doors, Deep Purple, The Dandy Warhols and the Foo Fighters.

Heroes of She, who formed just over a year ago, comprises vocalists Amy Worth and Helen Longworth and James Mackie, Hammond organ, and drummer, John Elles. James and John have also played as the maverick Hammond-drums duo, Get Carter.

The band see themselves as part of an increasingly vibrant music scene in North Lancashire.

"For years we have been starved of good music venues in North Lancashire but that's all changing," James says. "The Dome in Morecambe has hosted high profile bands like Arctic Monkeys, The Kooks and British Sea Power, and we purposefully had all our publicity pictures taken at the seaside town, in particular, in the magnificent Winter Gardens

Drummer John Elles, added, "Standing in the semi-derelict interior was a poignant moment for us all as we were very aware that hugely iconic bands such as The Kinks, The Beatles and Rolling Stones had all played here at one time."

"Earlier this Summer we represented the whole of the North West in BT's Battle of the Bands 2008 in the live final at the top of London's Telecom Tower," Amy revealed. "It was an amazing buzz."

• Band photo (taken in Morecambe's Winter Gardens) by Andy Hockridge. 'Never Going Home', the album, will be released in January 2008. A tour across the UK will kick off then and the band is investigating the possibility of touring in Japan. Check out the band's web site at: www.heroesofshe.com or www.myspace.com/heroesofshe
Posted by John Freeman at 11:05 1 comment:

Email ThisBlogThis!Share to TwitterShare to FacebookShare to Pinterest
Labels: Heroes of She, Local Bands, Music Events

Local author Andy Diggle has been in contact, noting Lancashire Care NHS Foundation Trust proposal to try to sell off Ridge Lea Mental Hospital to property developers and then build a whole new facility on a wholly inappropriate greenfield site, instead of properly redeveloping the existing location.

"The reason is that, unlike the regular NHS, Foundation Trusts are run like a profit-generating business, and they know they can make more profit by selling off the existing location that actually fixing the problem at source," says Andy. "It's a classic case of 'follow the money'."

There's a petition online, which closes today, 9th September, to bring this matter to the attention of the Prime Minister's office:

The result of the public consultation by the former Morecambe Bay Primary Care Trust (in 2004) was clearly in favour of new and improved facilities on the existing Ridge Lea site but unfortunately there was insufficient funding at the time. Now that the funding is available, locals feel that Lancashire Care should honour this conclusion, rather than consider a new, Greenfield site on Royal Albert Fields.

The petitioners arhue the proposed site will severely impact on traffic, is poorly served by public transport, and has no amenities (particularly shops) in the vicinity.

"We believe that a large amount of tax payers’ money is being wasted developing plans for a new facility that is poorly conceived, has opposition from residents, and the Head of Planning for the City Council," they says, "and should be developed on the land that already currently houses the Mental Health facilities."

The campaigners argue the Prime Minister should instruct the NHS Trust to build on the Brownfield (Ridge Lea) site.

Don't let them get away with it!

Posted by John Freeman at 10:53 No comments: