The Launch of 'The Round' 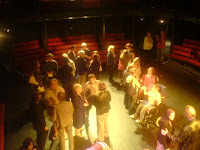 Dukes theatregoers now have to get used to a new vocabulary – The Rake (‘main theatre’ as was), and ‘The Round’: the small studio theatre behind it, which was square but which has now been nicely rounded (complete with comfortable seating), sound-proofed and expanded, but is still as intimate as ever (“with no audience member more than 3 rows from the action” see http://www.dukes-lancaster.org/about-dukes-theatre/spaces). So in principle there can be two live performances at the Dukes at the same time. Let’s hope Arts Funding allows us to be so spoiled for choice. (And if there were to be a performance at DT3 (the youth theatre just up the road) at the same time, and all three performances were sold out, that would mean 733 people in Lancaster watching live theatre simultaneously. Visionary!)

As it will be, if the Launch is just the beginning. Dressed in a cat-suit, local comedian and guitarist Kriss Foster entertained us with songs about Morecambe and Lancaster (at one point accompanied by the Mayor); this was followed by dancing and drumming from members of the Sujata Banerjee Dance Company (who will be performing the dance-drama A Sacred Thread on October 21), and an extract from the forthcoming new play The Bomb (to be performed in The Round from October 9 – 25). And words and phrases like ‘vibrant’ and ‘crucible of creativity’ flowed from the speakers: Dukes Director Joe Sumison, the Mayor of Lancaster, Phil Reddy from North West Development Agency, Ian Tabron from the Arts Council, and Nicholas Watson, Chair of the Dukes Board. And then there was a group photograph, canapés in the gallery, sweets in DT3, music from Orchestra DC Dansette, and a free ticket to the screening of the Brazilian film Linha De Passe.