"We are not, however, surprised," said the group in a statement. "We fully expected that the majority of the Committee, with the honourable exception of the Green Party, would ignore the substantial written objections to the scheme submitted by organisations such as English Heritage, SAVE Britain's Heritage, and the Victorian and Georgian Societies.

"The Committee also ignored the hundreds of objections submitted by members of the public, and those of Marketgate and St Nicolas Arcade.

"Many of these objections highlighted several aspects of planning policy which the proposed development would breach.

"Given what is at stake for Lancaster, It's Our City will now campaign for this decision and the development to be examined properly before a public enquiry. Individual councillors will have to answer for why they voted to accept the Centros application."

"It's unfortunate that most of the Committee seemed to take this decision without thoroughly examining the information provided," says Emilie Secker of It's Our City. "During the debate, many councillors did not ask a single question of the officers and consultants concerning their reports. Nor did they bother to follow up the issues raised in the objections. I hope that they are prepared to defend this at the public enquiry."

• For more on the It's Our City campaign go to: www.itsourcity.org.uk
Posted by John Freeman at 11:08 1 comment:

After months of debate, public protest, planning objections from all manner of organisations including existing retailers large and small, Lancaster City Council's Planing Committee did what it was expected to do earlier today -- and approved the outline planning permission for the controversial Centros shopping development that will hand a huge chunk of our city over to private hands for 250 years.

Just as Lancaster City Council backed plans in the 1980s for major retail development that fell apart, resulting in a travesty of a Market and a bungled city retail centre plan, so the vast majority its councillors voted 15-4 for yet another economics-driven rather than people-oriented 'vision' for Lancaster.

Undaunted, expecting the worst of its blinkered leaders, those opposing the plans will now press for further review.

"The next stage is to demand a Public Inquiry and look at options for Judicial review," said Councillor Chris Coates, "and reporting councillors to the standards board.

"Thanks to everyone who objected and supported the campaign against this Monstrocity."

The battle may have been won by those clinging to the debased values that have brought us to the current credit crunch and recession, but the war is far from over.
Posted by John Freeman at 23:15 3 comments:

In Review: The Bomb 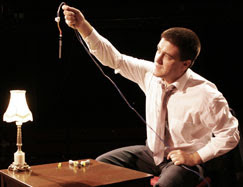 The Bomb is inspired by the first meeting between Jo Berry, whose father Anthony Berry was killed (with four others) in the 1984 IRA bomb-blast in the Grand Hotel, Brighton, at the Tory Party Conference, and Patrick Magee, the man who planted the bomb. Yet this play is not the direct testimony of Jo or Patrick, or taken from transcripts of their meetings (if such exist). It is about bomber Ned Keenan (Paul Dodds), whose bomb killed the father (John Mawson) of teenager Lizzie. Lizzie is now the adult Elizabeth (Janys Chambers), mother of Marnie (Abigail Hood) who has just completed her A-levels. The result is that the play includes both fictional episodes and verbatim words and phrases, garnered from interviews with Jo and Pat.
A review of a text-based production should focus on the production rather than the text. Yet the text is relevant, as it is written with young people in mind (Action Transport does plays by, for and about young people). On the night I went the audience consisted mostly of just such individuals, who were being characteristically lively before the start of the play. I have to admit that my heart sank somewhat. But they were silent throughout the play, so all credit to Kevin Dyer and Joe Sumsion there. (They were also clearly fascinated when Jo Berry and Patrick Magee took their own seats, together, in preparation for the post-show talkback session.) My own view is though that The Bomb remains a play of two halves – Elizabeth’s meeting with Ned, and Elizabeth and Marnie’s planned weekend in Blackpool, argument, separation and coming together again – despite Kevin Dyer’s integration of these elements in numerous thoughtful ways.
Staged in the Dukes’ renovated venue The Round, the audience sits around the debris of a bombsite – of Room 533 (where Pat Magee stayed to built and plant the bomb, and where Anthony Berry was later to die), but also, in a lesser way, of part of Elizabeth and Marnie’s house when Marnie empties her suitcase in anger when the Blackpool trip is postponed at the last minute so that Elizabeth can instead go to Belfast to meet Ned. Fragments of different objects hang from the ceiling. Julian Ronnie’s sound effects are magnificent, leading up to the final explosion. And Paul Dodds is an excellent and convincing Ned, sweating while he assembles the bomb, while a conscientious chambermaid knocks on the door.
The Bomb is about psychological complexities, and is ultimately about understanding and putting yourself in someone else’s shoes rather than forgiving (it is certainly not about forgetting). And it is crucially about human beings’ changing identities – the Ned of the play is not the same Ned who planted the bomb, Elizabeth has changed also (Marnie and Lizzie are intentionally played by the same actor). But it is dramatically and conceptually complex too. The Bomb plays with time and space, and shifts from dialogue to externalised interior monologue, which in turn is sometimes about the here and now (Ned thinks through every step of the way up to Room 533, as does Marnie on her own pilgimage to the Grand Hotel), and sometimes about what might happen (before their meeting, Elizabeth contemplates both releasing all the venom she once felt/sometimes still feels for Ned, and him stabbing her). Dramatising all this is very ambitious, and perhaps confusing for an audience in the play’s short duration, which in fact ‘buys time’ in order to allow for the long meeting between Ned and Elizabeth at the end. Whether is is right that the play’s balance is somewhat in favour of enabling us to sympathise with Elizabeth rather than helping us understand the political situation that motivated Ned and his comrades to do what they did is something the audience members will make up their own minds about. But do give yourself this opportunity.
Jane Sunderland

Kevin Dyer on The Bomb

http://www.actiontransporttheatre.co.uk/
Posted by Jane Sunderland at 21:36 No comments:

Email ThisBlogThis!Share to TwitterShare to FacebookShare to Pinterest
Labels: Reviews, The Dukes, Theatre

Pick your dress for the coming party season at a special fashion show in aid of Animal Care at Lancaster and Morecambe College at 7pm on Wednesday, 22nd October.

Gorgeous designer dresses by Monsoon, Phase Eight, Karen Millen and many more will be presented on the cat walk at the college’s Roeburn Suite. The dresses will be accessorised with affordable jewellery which can be bought or ordered on the night. They will be modelled by volunteers from the local area, showing how great the dresses can look on ‘real women’.

Admission is by ticket only at £4.50 which includes a drink on arrival and nibbles provided by the catering department. There will also be a raffle in aid of the charity.

Animal Care has existed in various forms for more than 30 years and it has been a registered charity since 1978. A few local animal lovers started to care for animals in their own homes when no-one else would help them and as the need for help increased so did the need for a permanent site to house the dogs, cats, rabbits, sheep, goats, horses and other animals desperately in need of care and attention. In 1987 Blea Tarn Kennels were kindly donated to the charity and since then the many volunteers involved in the charity have helped improve the site so it is able to provide the best home until a ‘forever’ home can be found for each and every animal.

At any one time there can be up to 40 dogs and puppies, 70 cats and kittens, 50 rabbits, rodents, ferrets and other species as well as wildlife that may need interim care before moving on to a specialist wildlife centre.

The charitable aims of the organisation are to help unwanted, stray and unloved animals and then to find them permanent homes with suitable owners. This in itself is becoming harder and harder as each year the centre has more and more abandoned and unwanted animals needing help. Even the smallest amount of money can enable the charity to help the animals in its care.

Tickets for the fashion show are available from Debbie Baxter on: 01524 811384. Please leave a message.

Pictured: Animal Care fashion show volunteers: Judy Robinson from Bare in a Wallis dress, Kim Thomas from Galgate in a Next dress and Charlotte Airey from Caton in a Monsoon number.
Posted by John Freeman at 16:33 No comments: