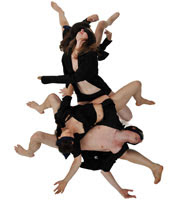 The Nuffield Theatre at Lancaster University and The Dukes in Lancaster have been awarded £30,000 to fund 6000 free theatre tickets for young people.

The tickets for a range of live shows will be available for young people under 26 over a two year period. The scheme, which starts this February, is aimed at attracting younger audiences to the theatre.

The theatres are the two local beneficiaries of the Arts Council-backed scheme. 99 successful applicants, representing more than 200 venues across England, have been invited to take part in a pilot scheme to give away 618,000 free theatre tickets to under 26 year olds in the next two years.

“We're really pleased to be working with the Dukes to attract local young people to our programmes, and to help establish regular theatre-going as part of young people's lives," says the Nuffield’s Director, Matt Fenton. "The great thing about the scheme is that it allows young people to make repeated visits and really develop their tastes and opinions.

"Between us, The Dukes and Nuffield Theatres offer an experience of every kind of theatrical performance, from established texts and new writing, to physical theatre, devised work and installations."

The national free theatre scheme is supported by £2.5 million additional funding to the Arts Council’s core grant from the Department for Culture, Media and Sport. Attendance at arts events traditionally drops in the 18-26 age range and so this initiative is specifically targeted at young adults and their families. The scheme is designed to reach new audiences and develop a new generation of theatre-goers.

Joe Sumsion, Director of The Dukes, is also delighted with the scheme.

“We know that when people get a taste for live theatre they often come back again and again. This scheme gives us the chance, working with the Nuffield, to offer thousands of young people the chance to see great theatre in Lancaster at no cost to themselves.”

Upcoming shows at The Dukes such as Loci Productions Mind the Gap (performed on 28 February) and Jamaica House (which opens on Thursday 19 March) should benefit from the initiative.

Explaining the reasoning behind the scheme, Arts Council England, North West's Interim Executive Director, Aileen McEvoy said: "We want young people to grow up with a strong sense of the possibilities the arts give them. The free theatre offer is an exciting new step in that journey.

The scheme will be launched nationwide on 16th February, with the Arts Council promising "a week of special activities at all participating venues," and a website set up to provide details of all participating organisations and direct links to book free tickets.

Web Links
• The Nuffield Theatre
• The Dukes
Posted by John Freeman at 13:19