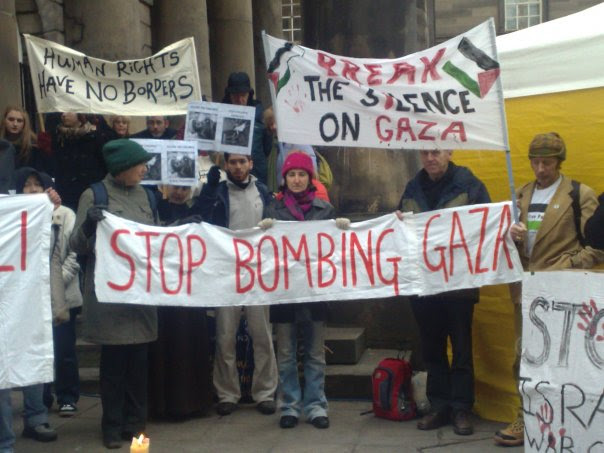 There will be another vigil in solidarity with the people of Gaza on Saturday 10th January in Market Square, starting at 11.30am. Supporters are asked to "bring banners, candles, photos, 'blood splattered' clothes" to join a "die-in" protest.

The Times reports that at least 524 Palestinians have been reported killed and nearly 2,000 wounded since December 27, when Israel began air raids on Gaza in retaliation for Hamas's failure to stop militants launching rocket attacks on southern Israel, which have also resulted in deaths and injury. The civilian death toll is rising by the hour and diplomatic efforts to halt the fighting appear to be making little headway.

The US has insisted that a ceasefire must be accompanied by assurances that Hamas will stop rocket attacks on Israel.

Links:
• BBC News - Gaza Conflist - Who Is A Civillian?
The bloodied children are clearly civilians; men killed as they launch rockets are undisputedly not. But what about the 40 or so young Hamas police recruits on parade who died in the first wave of Israel's bombing campaign in Gaza?

• The Times: Israel Splits Gaza in Three
This report includes an outline of the aims of both Israel and Hamas

Email ThisBlogThis!Share to TwitterShare to FacebookShare to Pinterest
Labels: Politics