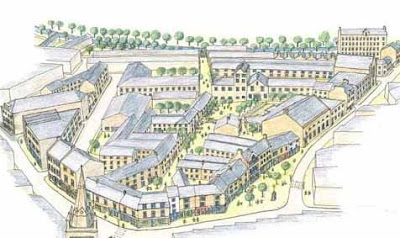 SAVE’s scheme for Lancaster's Canal Corridor site, drawn by Richard Griffiths Architects
After news that developer Centros has pulled out of the forthcoming Public Inquiry into its controversial Canal Corridor scheme for Lancaster (see news story), campaign group SAVE Britain’s Heritage has revealed its own blueprint for the regeneration of the area.

The current scheme from retail developer Centros, backed by Lancaster City Council, became the first application in the north west of England to be "called in" for Public Inquiry since 2001. Described by SAVE as ‘astonishingly destructive’ and heavily criticised by English Heritage and other bodies, the proposals involve the demolition of over 30 buildings, 18 of them within conservation areas, and the obliteration of a medieval street pattern.

Centros has now backed out of the Public Inquiry, leaving Lancaster City Council to fight it alone, a situation SAVE’s Secretary William Palin describes as "chaotic and embarrassing."

Announcing its decision, Centros also criticised the Government for calling in the company’s development proposals for the £140m regeneration of the 10-acre brownfield site in Lancaster city centre.

"I understand it there is no precedent for the applicant and developer failing to attend an Inquiry of this kind," says Mr Palin. "The council which will now be faced with a huge legal bill for what will in all likelihood be an open and shut case, with the application refused."

With the Centros application in apparent disarray, SAVE has commissioned acclaimed conservation architect Richard Griffiths to produce an alternative vision for the eight-hectare
site.

The drawings show how the existing network of streets and courtyards with their characterful mix of 18th and 19th century sandstone buildings could be retained and transformed to produce a vibrant and intimate area of shops, restaurants, arts uses, workspace and housing, with the possibility of a new area of retail and housing to the north of the site.

"In the current financial climate there is little appetite for large, brash, retail schemes and Centros’s reluctance to push the scheme forward has confirmed this," argues Mr Palin. "If the council is serious about long-term regeneration then it should be advocating a conservation-led scheme which will create a real place and dovetail with the rest of this beautiful, historic city.

"The first stage in achieving this is to produce a masterplan that can be implemented in phases as funding becomes available. If the council has real aspirations for this part of the city it should be looking at examples such as Covent Garden or those guided by Richard Griffiths at Oxford Castle and King’s Cross, London.

"Now is the perfect time for Lancaster City Council to engage with other architects and developers and produce a new vision to unlock the wonderful potential of this site."

"The Lancaster Canal Corridor is an area of great charm, a charm that is veiled because of the current derelict condition of the site," feels Richard Griffiths. "We believe it can be transformed through conservation-led regeneration as a focus for development of the site, contributing to the wider regeneration of Lancaster as a whole.

"The Canal Corridor has the potential to become a creative hub for the town with a rich variety of uses."

The SAVE scheme has been endorsed by local group It's Our City, which has been a fierce opponent of the Centros plans.