In Review: Guys and Dolls 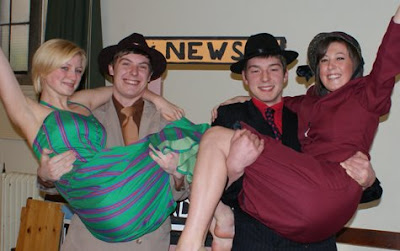 The actors and production team from the two Lancaster grammar schools are again to be congratulated on another high quality musical production, one with its own particular musical and dramatic challenges. In particular, there is a lot of script between the songs, full of witty lines which require careful delivery in a New York accent.

Set in the 1940s, the story juxtaposes gamblers with the sisters and brothers of a Salvation Army-style Mission (with its own music) who are single-mindedly dedicated to bringing about the gangsters’ (aka ‘the sinners’) repentance. Interwoven are two threads of romance: ‘doll’ Miss Adelaide (Rosie Bates) and her long-term fiancé ‘guy’ Nathan Detroit (Tim Heap), dedicated organiser of craps games; and ‘doll’ Sergeant Sarah Brown of the Mission (Lizzie Fawcett) and her (eventual) ‘guy’ Sky Masterson (Jordan Grimshaw) – a gambler who out of love ‘changes sides’.

The orchestra and cast are to be congratulated on the larger numbers, and I would single out ‘Sit down, you’re rocking the boat’, led by the wonderfully-named ‘Nicely-Nicely Johnson’ (Henry Page) and sung by the whole company. There are also some excellent individual singing voices. Both Rosie Bates and Lizzie Fawcett shine, and their duet in Act 2 (‘Marry the man tonight’) is a delight. Henry Page deserves an extra mention for his stage presence. All three are well cast, and very comfortable in their acting roles – in particular Rosie Bates. Two other memorable characters are the gamblers Harry the Horse (James Carey) and Big ‘Julie’ (Chris Scott).

The dancing is very good too, polished and fluid – especially that of the girls, although the boys come into their own in Act 2 with the ‘Crapshooters ballet’, which follows Arvide Abernathy’s (Conrad Jarman’s) rendering of the lovely ‘More I Cannot Wish You’.

The choreography is excellent throughout: a challenge with a large cast on a small stage. But look at any actor at any time, and they are still completely in role, usually interacting with another. Congratulations to Director Timothy Hall here for this very tight production.

Lastly, the imaginative and striking sets (especially the Hotbox Club and the Havana bar) serve as a reminder of the work and dedication which goes into these productions. The programme attributes the set construction to ‘Mike Ryan, Andrew Jarman and many others’ – and I will end this review with an extra tribute to those many, and anonymous, ‘others’ who were literally and otherwise behind the scenes of Guys and Dolls.