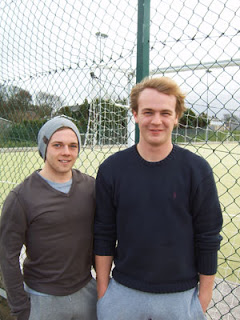 Students from the University of Cumbria have been putting on free sports coaching sessions for local youngsters on the Lancaster (St. Martins) campus.

Sam Williams, Tom Underwood, Andrew Findlay and Iain Griffiths, who are all second year Coaching and Sport Development students, decided to organise a youth inclusion project to target youngsters aged 8 to 11 who often gather on campus and by the astroturf in the evening.

The six week project has been modelled on the national StreetGames UK initiative, which organises sporting activities for youngsters currently on the margins of more formalised sport experiences. After a guest lecture from John Downes of StreetGames UK, the students created a free coaching programme for older primary school aged youngsters to provide them with a range of structured sports activities over six weeks in February and March.

The project has been supported by staff from Morecambe FC's Football In The Community scheme and funding has been provided by Stuart Glover from Lancaster City Council.

"What we wanted to do was set up a project to get young kids involved in sport, as well as introduce them to different sports like rugby league and lacrosse," Sam explains. "They've been really enjoying it and their parents have also been very supportive."

"There often aren't opportunities for kids in the area to play different kinds of sports," Tom feels, "so that's part of what we've been doing. There are about 10 to 15 kids involved at the moment but we're hoping to get more."

"In the final week, we hope to get local clubs involved to help signpost the youngsters towards appropriate club exit routes from the programme," says Mark Christie, Module Leader for the 2nd year Delivering Organised Sport module, "to provide the children with a means of continuing their interest and developing their skills.

"There may also be additional funding from Lancaster City Council and some students may be involved as part of their 2nd year placement module with continuing the scheme if it proves successful - the early signs are very encouraging indeed. Typically youth inclusion projects experience very small numbers in their early stages, but the students have done well to attract over a dozen straight away, and, importantly, they are asking the youngsters what they want to experience in the sessions, thereby facilitating an immediate sense of shared ownership of the project."

"This project has developed from the Universitiy's involvement in recent diversionary activities programmes that are delivered by a range of partners," commented Stuart Glover, Leisure Development Manager for Lancaster City Council. "The project helps the students to develop their skills in community coaching setting rather than a formal structured club setting. The project also provides much needed activities for young people in the surrounding area. Students have also been assisting Lancaster City Council staff in their coaching programme as well as supporting Morecambe football club in delivering football sessions across the district."
Posted by John Freeman at 14:53