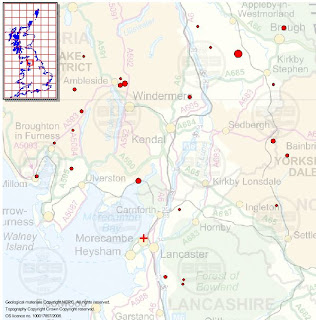 Lancaster and Morecambe residents were rocked by an earthquake this morning, but it was Ulverston that took the brunt of the tremors.

The earthquake hit at about 11.20am, prompting phone calls to local police. The British Geological Society said the earthquake originated at Ulverston in Cumbria and recorded 3.7 magnitude on the Richter Scale.

The BGS operates a network of seismograph stations throughout the UK to monitor both natural and man-made seismic disturbances on a long-term basis.

The Lancashire Evening Post and the BBC reported the quake was reportedly mainly felt around the Kendal, Windermere, Thornton Cleveleys, Morecambe, Barrow, Fleetwood and Lancaster areas.

There were no initial reports of damage or injuries, but Frank McCall, of Grange over Sands, told the BBC he felt the house shake.

"At first I thought a lorry had hit. I went outside and noticed neighbours were also on their doorsteps looking a bit bewildered.

"There hasn't been any damage that I can see, but it was quite frightening."

Morecambe resident Richard Henderson told Sky News the tremor lasted between five and 10 seconds and it was "strong enough to shake the rooms in the house," he said.

Jane Barker told the news channel she was at work in Lancaster when it felt as though a "van had hit my building".

The Geological Society says the UK experiences an earthquake of this size roughly once every year and they rarely cause any damage. The map above, created by the BGS, features recent local quakes.

• Send your experience of the earthquake to the BGS

• More information about earthquake intensity in the UK here

• Map of local earthquakes on the British Geological Survey site