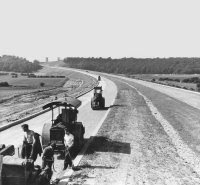 The 50th anniversary of the motorway exhibition sponsored by the Highways Agency opens in Lancaster City Museum on Saturday 2 May.

The exhibition, titled M6:50, created by Lancashire County Council with funding from the Agency to mark the opening of the country's first motorway - the M6 Preston bypass on 5 December 1959 - also features the Lancaster bypass.

It describes how the motorway was built, and includes stories from people who remember Preston bypass being opened and a look at life before the motorway. Visitors can even grab a cup of tea in a replica of one of the first motorway service areas at Forton.

"I know the exhibition has been popular in Preston so I am pleased that people in North Lancashire can now see the pioneering work that went on to build the country's first motorway," commented David Grunwell, Highways Agency North West Divisional Director. "The Highways Agency - as operator of the motorway network - is proud to be the main sponsor of the exhibition. We are looking forward to another 50 successful years working to ensure a safe, reliable and sustainable network for road users and we hope visitors will enjoy looking back at how the motorway network, which is so crucial to our economy, was born."

The first stretch of the M6 - the Preston Bypass - was opened by Prime Minister Harold Macmillan on 5th December 1958, the first stretch of motorway in Britain. Work on the 11 mile Lancaster bypass began in July 1957 and it was completed in April 1960. It includes 27 bridges, the most familiar being the 400 foot long crossing of the River Lune.

Preston bypass and Lancaster bypass were joined in 1965 making 111 continuous miles of M6 from Stafford to Carnforth.

• M6:50 will be at the Market Square Museum between Saturday 2 May and Saturday 29 August from 10am to 5pm Monday to Saturday.
Posted by John Freeman at 13:25