Outright TT lap record for McGuinness - But no race win 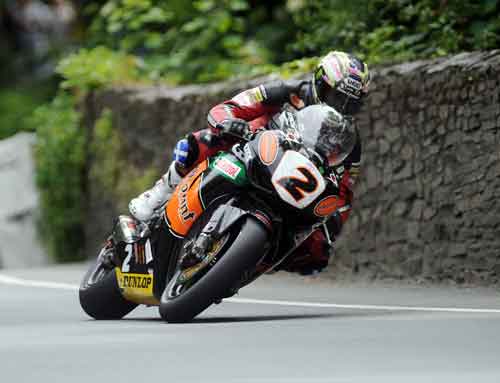 Morecambe's John McGuinness set a new outright lap record during Friday's Senior TT race in the Isle of Man -- but he was cruelly denied a 16th TT win when the chain on his bike broke on the fourth lap. Having broken his own lap record on the first lap, he totally smashed it on the second and, with a sensational lap of 131.578mph, he moved clear -- but the retirement put paid to any hopes of claiming the race for a fifth consecutive year.

After a 30-minute delay, the race got underway at 1.30pm and John signalled his intentions when he led by 2.42 seconds at Glen Helen, nine miles into the race. He continued to stretch his advantage and an opening lap of 130.953 mph was a new lap record, but teammate Steve Plater was still pushing him hard. John upped the ante on the second lap and his lead was increasing rapidly. Indeed, with a new outright lap record of 17m12.30s, 131.578mph his lead rocketed up to just under 15 seconds.

A pitstop of just 40 seconds saw the rear wheel changed and a full tank of fuel taken and another four seconds was added to his lead on the third lap. John was now controlling the race from the front but as he exited Parliament Square for the fourth time, the chain snapped as he changed into second gear and his race was over.

"I so, so wanted to win today," said a philosophical John, speaking later. "I made a good, fast start and there were no tactics employed today, I just had to go fast straightaway because if you don't you're beaten.

"The first lap went to plan and I felt really good but Steve wasn't too far away so I tried that bit harder on the second lap and it worked. The lap felt really good but I must admit I was surprised to have broken the outright lap record by so much. It didn't feel extra fast, it just felt really nice and clean."

"I tried hard on the third lap also and when the lead went up to almost 20 seconds I thought things were looking good but as I clicked up to second gear coming out of Ramsey, the chain just broke.

"To say I'm gutted would be an understatement," he continued. "The bike's been fantastic all fortnight and it's never missed a beat whilst all the boys have done a superb job so it's a shame we ended with a DNF -- but that's just how the TT goes sometimes. To get the outright lap record is a consolation but that's all it is and I'm gutted not to have got the win.

"Things could have been worse though and I can still take a lot of heart from the fact that since 2004 no-one's beaten me in a Superbike race - I've had eight wins and two retirements. That's not a bad record to have!"

John will now resume his British Superstock Championship challenge at Snetterton next weekend.