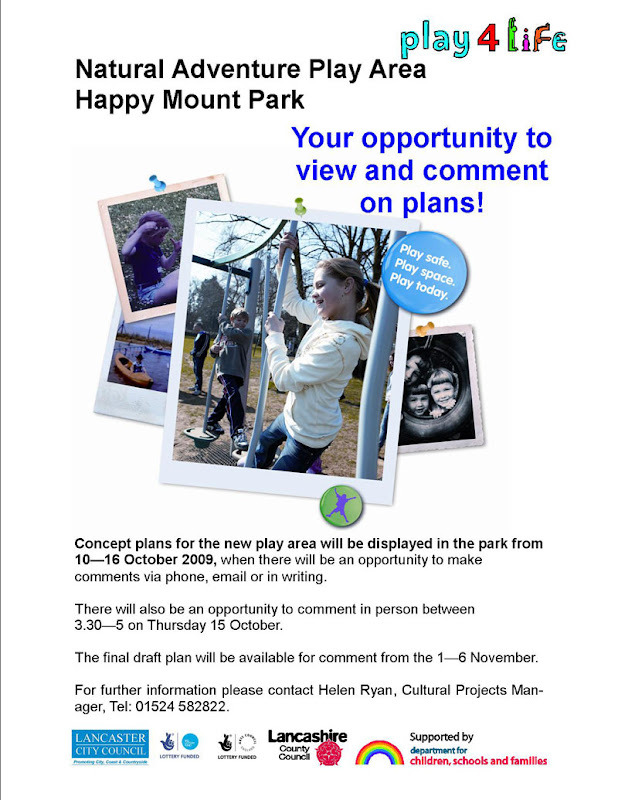 Concept designs for a new "natural" play area in Morecambe's Happy Mount Park are due to be revealed.

Based on the underused mini-golf area at the rear of the park, the play area has been designed on the principles of "natural play".

This approach encourages more creativity in the design of play environments using natural elements such as trees, rocks, mini-hills and other natural play features.

Earlier this year, young people were asked to work with the council and its designers to share ideas of what could be included in the new play area.

The comments have been incorporated into the initial concept designs, which will go on show between 10th and 16th October.

They will be available to view in the park and on the Lancaster City Council website at: www.lancaster.gov.uk/happymountpark.

Council officers will be in the kiosk at the centre of the park to discuss the plans between 3.30pm and 5.00pm on Thursday 15th October.

The council’s Play Rangers will also be in the park between 4.00pm and 5.00pm on the same day.

“We are very grateful for all the help we’ve received so far from young people in designing the new play area," commented Coun June Ashworth, Cabinet member for children and young people, "and their ideas have played a key role in shaping the plans.

“On its completion the play area will transform an underused area of Happy Mount Park and we’re all looking forward to seeing the designs come to life.”

Comments made during the consultation will be taken into account when producing the final design for the play area.

The design and build of the play area is funded by grants totalling more than £114,000 from the BIG Lottery, Lancashire County Council Play Builder, Community Design and Arts Council England.