Someone Will Take the Chair at the Nuffield... 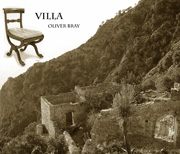 Lancaster University's Nuffield Theatre hosts a solo show with five performers on 21st October – four of which are audience members.

Oliver Bray, known to Nuffield audiences from his work with Until Thursday Theatre Company is performing solo in a new work, Villa, based around a Russian family’s tragic story of loss. Exploring British naivety, philosophical wordplay and Chekhov, it's described as a foray into Eastern Europe that subtly upsets narrative conventions.

Until Thursday have been making theatre performances for six years with productions that include the fragmented and boozy We Should Have Stood Still, the best selling and Hip Hoppy Droppin’ Shoppin’ and the bitter-sweet, politically ignorant It’s a Question of Taste.

• There are a limited number of free tickets available for this performance to those aged 16-25. Please contact the Nuffield box office on 01524 594151 (24 hour answerphone) for further details.
Posted by John Freeman at 21:35