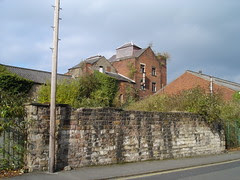 (Updated 8/12/09 to include Council statement): In a dramatic turn of events this morning the heritage group SAVE went to the High Court and obtained an injunction against the immediate demolition of the Mitchell's brewery building on Lancaster City Council and Mitchell's of Lancaster (Brewers) Ltd. Lancaster City Council had announced yesterday (2nd December) that it would do nothing to prevent demolition. Their letter coincided with evidence that demolition was already underway on the site. You can read the full text of the city council letter here.

Initially local residents concerned about the roof removal taking place were reassured that the work was simply removing asbestos from the building. The future of the building was scheduled for discussion at the City Council Planning meeting next Monday 7 December.

Neighbours kept an eye on proceedings in the interim and obtained evidence that nothing less than a complete demolition was being undertaken. Eventually the City Council explained that Mitchells had asserted that a demolition would not constitute 'development' and was therefore not bound to adhere to the planning process. The council was unwilling to risk the expense of litigation over the matter and therefore declined to intervene.

“The collapse of any pretence of effort on the part of the Council to prevent demolition is disgraceful," argues Bulk Ward and Green City Councillor John Whitelegg. "The Council knows full well that large numbers of local people object to demolition as do all ward councillors. The Council knows that bats are present in these buildings and a criminal offence is now being committed in disturbing bat roosts. The Council has initiated a review of conservation area boundaries and spent taxpayer’s money on this and demolition will render that exercise useless. It is hard to imagine a greater dereliction of duty on the part of a public body.”

Commenting on the Council's position on the demolition Mark Cullinan, Lancaster City Council’s chief executive, said: "Following expert legal advice the city council has determined that prior approval for demolition is not needed and we cannot therefore prevent the brewery from being demolished.

"A suggestion has been made that the city council could serve a Building Preservation Notice. However, again based on legal advice, the council has determined that this action would be ill-advised for a number of reasons, not least that the council could be subject to a compensation claim."

This morning, the heritage group SAVE went to the High Court and obtained an injunction against immediate demolition on Lancaster City Council and Mitchell's of Lancaster (Brewers) Ltd.

"If you do not obey this Order you may be found guilty of Contempt of Court and may be sent to prison or fined or your assets may be seized.

"The claim for judicial review is to be issued and served on all Parties on or before Wednesday the 9th December 2009."

The injunction was also sent to the Secretary of State for Communities and Local Government.

Locals who have been campaigning for sustainable development of the site lost no time in pointing out that despite its fiscal difficulties the Council recently budgetted approximately £60,000 to defend the unpopular Centros planning application for this site at its recent Public Inquiry. In the absence of Centros, who refused to attend, the council's case suffered an embarrassing collapse.

This morning, a number of demonstrators visited the site with the intention of physically preventing further demolition until the legal situation could be clarified. The injunction was served.

• Any sign of further demolition work can be reported to the police and also to lawyer Susan Ring of the firm Richard Buxton Environmental & Public Law. Tel: 020 8948 1135
Email: sring@richardbuxton.co.uk
Web: www.richardbuxton.co.uk
Posted by Chris Satori at 14:11