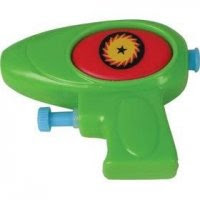 A group of like-minded water pistol fanatics have organised an event in Williamson Park next month that should cool everyone down at the height of summer -- assuming we have a better summer than last year, that is.

Soak Britain will kick off at 1.00pm until 4.00pm "or until we run out of water!" says co-organiser Walter Incan. "It's a complete free-for-all water fight, so bring a water pistol, and get soaking. Everyone's welcome.

"A couple of us organised a water fight a few years back, and through word of mouth, we managed to get over 100 people there," he reveals via the group's web site. "It's been a while, so we've decided to see if we can do it again, only bigger and better with the help of the internet this time."

The event is completely free, although you do need to bring your own watergun.

Posted by John Freeman at 08:56 No comments:

Lancaster City Council is inviting children and their parents to Happy Mount Park on June 6 to help design an innovative ‘natural play area’.

Taking place between 2pm and 5pm, the aim of the event will be to give children the chance to experiment with different natural materials and share ideas of what could be included in the play area.

Helen Ryan, Cultural Projects Manager at Lancaster City Council, explained: “Traditional play areas tend to be made up of play equipment which leaves little room for imagination or personal development.

“The new area in Happy Mount Park will be based on the principles of ‘natural play’ – encouraging more creativity in the design of play environments using natural elements such as trees, rocks, mini-hills and other natural play features.

“To make sure the play park contains everything that it needs to we need to hear from the people who will be using it – children themselves.”

The city council has been awarded more than £114,000 (BIG Lottery, Lancashire County Council Play Builder and Community Design and Arts Council England) to develop and deliver plans for the new play area in the park and has commissioned acclaimed art and architecture practice Muf to lead the design. In 2008 Muf were awarded the European Prize for Urban Public Space.

As well as leading the event in Happy Mount Park, representatives from Muf will be taking pupils from Morecambe High, Beaumont College and a local primary school to Grizedale Forest. The pupils will be encouraged to explore the forest to inform the design process.

• For more information visit:
http://www.lancaster.gov.uk/sports-and-leisure/arts-development/natural-adventure
Posted by John Freeman at 15:34 No comments:

Are you in the mood for dancing?

Are you a member of, or do you teach, at a dance school?

If so, you may be interested in an opportunity to display your talents at the forthcoming Family Fun Weekend at Morecambe’s Festival Market, which will be held on 4th - 5th July.

The Festival Market would like to offer the centre car park arena to any dance schools who would like to show off their routines to parents, customers and other onlookers.

There are only limited time slots (of approximately 30 minutes) available so it will be first come first served basis. In addition, if any local singers would like an entertainment slot and have their own equipment, the same opportunity is offered – that is an appreciative audience on a busy weekend!

The two day fun weekend promises to be a feast of free entertainment for young and old alike.

For further details contact Tracey Bruce on 01524 414251 or email tbruce@lancaster.gov.uk.

Posted by John Freeman at 10:01 No comments:

Don't miss your chance to vote

Local voters are being reminded that they do not need poll cards to vote in next week’s local elections.

On 4th June, voters across the district will go to the polls in elections for Lancashire County Council and the European Parliament.

In Morecambe there are also elections for Morecambe Parish Council and in Lancaster the voters of Castle Ward will elect a new city councillor following the recent resignation of Catriona Stamp.

Although poll cards have been delivered to all those residents who are on the electoral register, if you have lost yours or not had one delivered don’t worry.

To be able to vote you do not need a poll card – simply visit your polling station and give your name and address.

Anyone who is unsure whether they are on the electoral register, or the location of their polling station, should telephone the elections helpline on 01524 582905.
Posted by John Freeman at 08:44 No comments:

It was one of the worst acts of genocide in history. 200,000 people executed - up to two-million others dying from starvation or disease.

The Khmer Rouge regime was toppled after four years of rule in Cambodia in 1979, but the remaining leaders are still being tried on charges of crimes against humanity.

University of Cumbria's Professor of Buddhist Studies Ian Harris has a special interest in Cambodia and has written the only detailed work of research on the fate of Buddhism during the Khmer Rouge Regime - Buddhism Under Pol Pot Phnom Penh: Documentary Centre for Cambodia, 2007. Following a recent lecture in Thailand, he travelled on to Phnom Penh to discuss a future role as historical consultant at the Extraordinary Chambers in the Courts of Cambodia - better known as the Khmer Rouge War Crimes Tribunal.

Ian said: "I first went to Thailand in 1970 and have been back many times since. My field of expertise is the history of Buddhism in South East Asia. I'm principally interested in Cambodia but since Thailand is a neighbouring state I also try to keep up with what is going on there too."

In 1997, Cambodia established a Khmer Rouge Trial Task Force to create a legal and judicial structure to try the remaining leaders for war crimes and other crimes against humanity, but progress was slow.

The government said that due to the poor economy and other financial commitments, it could only afford limited funding for the tribunal. Several countries, including Canada, India and Japan came forward with extra funds. But by January 2006, the full balance of funding was not yet in place.

Nonetheless, the Task Force began its work and took possession of two buildings on the grounds of the Royal Cambodian Armed Forces High Command headquarters in Kandal province, just on the outskirts of Phnom Penh.

In March 2006, the Secretary-General of the United Nations Kofi Annan nominated seven judges for a trial of the Khmer Rouge leaders. Trials which are still taking place.

Prior to travelling to Cambodia, Ian chose his vowels and consonants carefully while delivering a lecture in Bangkok, as a guest speaker at Mahachulalongkornrajavidyalaya University.

The lecture was well received by the majority of those attending - but not everyone was happy about being reminded of an uncomfortable truth.

Ian's topic: "Is Buddhism a Religion of Peace? Reflections on Conflict and the Buddhist Politicial Imagination."

Ian said: "The audience was mainly Buddhist monks - including the Supreme Patriarch of Cambodia and his entourage.

"I tried to argue that, although Buddhism possesses various meditative practices designed to calm or pacify the mind, the history of Buddhist states in South East Asia has not been especially peaceful. Buddhist monks don't like to be reminded of this so some of the audience were a little irritated."

Up to 3,000 delegates attended the event - including HRH Princess Sirivannavari Nariratana; The Prime Minister of Thailand Abhisit Vejjajiva; and His Holiness Somdet Phra Buddhacharya - Supreme Buddhist Patriarch of Thailand.

The 6th International Buddhist conference was held in conjunction with the United Nations Day of Vesak - a festival celebrating the Buddha's birth, enlightenment and death.
Posted by John Freeman at 08:44 No comments:

Email ThisBlogThis!Share to TwitterShare to FacebookShare to Pinterest
Labels: University of Cumbria 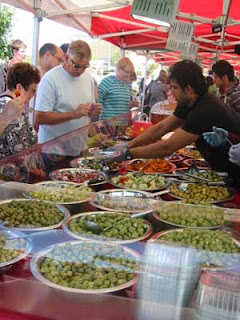 You didn’t need to be multi-lingual this weekend if you visited the Festival Market in Morecambe to know that the tantalising treats on offer there were truly 'delizioso'!

Not only that but the weather finally came through and helped to make any visitors to the visiting Italian Market feel as they were in Naples, Sicily or Florence.

For the sweet toothed, there was a huge selection of Italian biscuits, ice cream, pastries, fudges, liquorice, nuts and dried fruits.

For anyone strong willed enough to avoid and amazing array of edible temptations there was the unique and beautiful Murano glass jewellery (which is made on an island near Venice), clocks and mirrors on offer too.

The Italian market added to the already substantial offer from Lancaster City Council's Festival Market, which offers customers 108 stalls and shops. The combined offer of both markets meant that parking spaces were at a premium as people flooded in to sample some bargains by the sea.
Posted by John Freeman at 10:26 No comments: