Seven voluntary groups, including an Over 60s and a history club will share more than £2,000 in awards from Lancaster City Council from its welfare grants fund.

"These seven organisations are a major asset to the community and provide simple necessities to people who are not always able to provide for themselves," commented Coun Fletcher, the Council's cabinet member with responsibility for valuing people.

“The amounts of money we have been able to allocate may seem small but for many of the organisations even the smallest sums can make all the difference.

"I am very proud that we are able to support them in this way and hope our contribution can enable them to maintain the care and assistance they already provide."

Posted by John Freeman at 12:11 No comments:

Student places at the University of Cumbria increased

Responding to government initiatives 31 extra student places have been created at the University of Cumbria for the next academic year, 2009/10, but although welcoming the new programs the Vice Chancellor has expressed some concern at the narrow focus of the new funding.

Recently, Secretary of State for Business, Innovation and Skills, Lord Peter Mandelson announced 10,000 additional opportunities for full-time undergraduates across the UK. The new places will be available in priority subject areas designated by the government to support its New Industry, New Jobs policy - including science, technology, engineering and mathematics.

The government will fund the costs of the student support and loans towards institutional fees, but will not provide additional HEFCE grant to institutions. The share of places has been determined by the number of full-time undergraduates entered in 2007-08 in the priority subjects that the Government identified.

Where institutions have indicated to HEFCE that they are unable to take up their share of places, HEFCE has redistributed them pro-rata across the sector. The announcement builds on the record numbers of students currently at university and the record number of places on offer.

"By making available 10,000 extra places in science, technology and maths we are not only helping more individuals with the ambition and ability to go to university but also investing in this country's future," Lord Mandelson said. "Our expansion of higher education is more important now than ever as we continue to invest in a highly skilled workforce to win the jobs of the future and lead the way in building Britain's future."

"In tougher times it is right that we continue to invest which is why we are providing funding today to help meet some of the unprecedented demand to study at university," commented Higher Education Minister David Lammy. This is a fiscally neutral change - the costs of supporting the extra students will be met through reprioritising existing budgets and reducing the optional five year holiday on repayment of student loans to two years."

Over the last three years, the number of people attending university has risen by 50,000.

University of Cumbria Vice Chancellor Professor Peter McCaffery said: "We are pleased the Government has responded to concerns voiced by universities, particularly given the high number of applicants hoping to enter higher education this year. Having additional student places reintroduces some flexibility into the system.

"I understand why they have been confined to STEM (science, technology, engineering and maths) subjects - but would be concerned if there was a negative impact on areas such as the social sciences, arts and humanities in the future. Universities remain committed to protecting the quality of the student experience for everyone - regardless of their chosen subject." 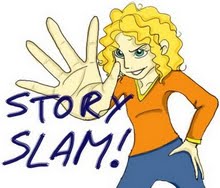 • The Story Slam will be at The Storey on Friday 4th September. Doors open at 7pm. Slam starts at 7.30pm. Admission: £5. Tickets can be bought in advance from www.seetickets.com. For more information about the contest, and The Story Slam in general, visit www.thestoryslam.co.uk.
Posted by John Freeman at 23:24 No comments: