Billie Holiday Tribute at The Dukes 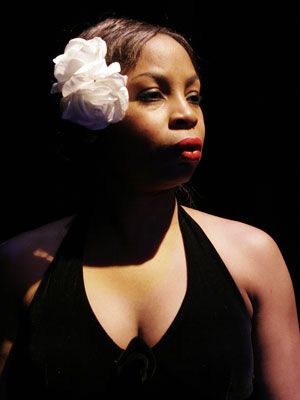 Billie Holiday fans are in for a treat on 11 and 12th September when Dukes favourite Katrina Beckford brings God Bless the Child: An Evening with Billy Holiday to the venue.

Direct from a successful run at this year’s Edinburgh Festival, God Bless the Child takes a glimpse into the life of one of the most extraordinary and enigmatic singers in music history.

For two nights only, The Round auditorium will transform into a buzzing jazz joint as Billie Holiday takes you on a remarkable journey from a misspent youth in Baltimore to the lavish clubs of 1930s Harlem.

This moving insight into a true musical icon commemorates the fiftieth anniversary of her death and includes classic songs such as Fine and Mellow, Strange Fruit and Lover Man.

Live jazz will also be playing in the Dukes Bar before the performances.

A weekend of jazz films has also been programmed to complement the show. Orson Welles’ classic 1958 film noir Touch of Evil has a masterpiece jazz score and will be showing on 10th September. Jazz on a Summer’s Day, a documentary capturing a host of jazz giants who played the 1958 Newport Jazz Festival, will show on 11 and 12th September alongside Tis Autumn, a documentary offering a poignant look at the great but unheralded singer Jackie Paris.

• Tickets for God Bless the Child cost £11 and £9 for concessions and can be booked on 01524 598500 or www.dukes-lancaster.org. A number of young people’s free theatre tickets are available for this production. Film tickets cost £5 and £4 concessions.

Posted by John Freeman at 18:04 No comments: 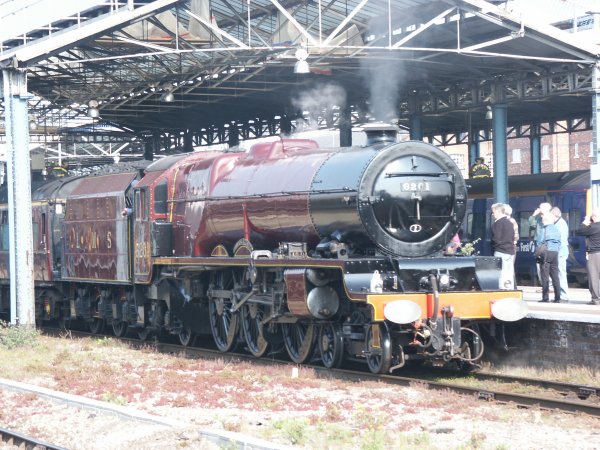 Lancastrians out and about on St. George's Quay or crossing Carlisle Bridge last night were rewarded with a spectacular view of the Princess Elizabeth steam train heading north for a special steam weekend.

The Princess Elizabeth steam train will pull into Carnforth Railway station at 9.44am on Saturday to pick up water on its run to Carlisle.

When originally built, the Princess Royal class engines were used to haul the famous Royal Scot train between London Euston and Glasgow Central. They were withdrawn in the early 1960s in line with British Railways' modernisation plan.

The station will also play host to a two-day model railway exhibition (Saturday and Sunday 22-23rd August), with stalls selling secondhand items along with a display of railway station signs.

Pictured above: The 6201 Princess Elizabeth at Chester on a main line railtour, 12 April 2003. Photo by Alan Crawshaw who has given permission for GFDL. He and his lovely wife run a guesthouse in North Wales, be sure to check it out!
Posted by John Freeman at 17:37 No comments:

Students at Lancaster University are among the most satisfied in the country, according to the latest National Student Survey.

Lancaster University has been ranked 11 overall in the table or joint 9th amongst more than 100 similar institutions with 89 per cent of Lancaster students saying they were satisfied with the overall student experience.

Lancaster also came out top for overall satisfaction in the North of England.

This is the fifth annual National Student Survey. A total of 155 higher education institutions (HEIs) across the UK and 117 further education colleges (FECs) in England took part.

This is the latest in a long run of successful league table results for the University. Lancaster is currently ranked 12th in the UK out of 113 institutions by The Independent newspaper and is top in the North West in four national league tables: The Sunday Times, The Times, The Guardian and The Independent.

"We're determined to continue to improve the experience for all of their students and deliver the very highest levels of student satisfaction.

"Deciding on which university to attend is an increasing important choice in a very tough job market. Savvy students have worked out that 1994 Group universities such as Lancaster offer the very best academic experience."

Watching soaps, reading tabloids and turned off by politics – the children of International Migrants in Britain show a high degree of cultural assimilation compared to their European neighbours, according to a new study by Lancaster University.

The findings are based upon a survey of over 2500 young adults. These included Indians and Pakistanis in Britain, Maghrebians [North Africans] and Portuguese in France, and Turks and former-Yugoslavs in Germany.

The research not only provides new evidence but also challenges some of the popular assumptions made about children of international migrants living in Europe today.

A new book based on the research reveals:

• Powerful evidence of cultural assimilation. Young Pakistanis and Indians in Britain preferred TV shows like EastEnders and Coronation Street. Most read The Sun and the Mirror.

• There was no evidence of political radicalism. Rather, there was a general indifference to politics amongst all groups. Children of international migrants in Britain expressed very little interest in the politics of their parents’ country. 71 per cent of Indians and 43 per cent of Pakistanis expressed ‘no interest’. This contrasted particularly with Turks in Germany and North Africans in France.

• Arranged marriages remained common amongst young Indians and Pakistanis in Britain. Indeed they were generally well accepted by them. However, such marriages took place at a significantly older age than in the Indian subcontinent.

• Ethnic disadvantages within education were pronounced in Germany but far less evident in Britain. Indians and Pakistanis in Britain experienced much better relative educational outcomes than children of international migrants in France and Germany. Turks in Germany and North Africans in France fared poorly in the German and French educational systems. In Britain Indians and Pakistanis were three times more likely to enter a university than their counterparts in France and Germany.

• All groups were multilingual: they could understand their parents’ home languages as well as films and TV in such languages [eg Punjabi and Gujerati in Britain]. However, they generally used the host language [ie English in Britain] with their friends and their brothers and sisters.

• Religion remained an important aspect of the day to day lives of children of international migrants. Amongst Muslim groups (Indians, Pakistanis, Turks and Maghrebians) there was limited evidence of secularisation. The general picture was of a complex religious mosaic in all three countries.

• Religious differences remain more significant in Britain. 59% of Indians attended a place of worship regularly as did 38% of Pakistanis. However very few were members of religious organisations [15%of Indians and 8% of Pakistanis]

“Perceptions of discrimination were lowest in Britain and highest in Germany," commented Professor Penn, reflecting the failure of the German model of exclusive ‘ethnic nationalism’.

“Britain’s model of multiculturalism is proving far more effective for the incorporation of ethnic minority groups than French ‘assimilationist’ or German ‘ethnic nationalist’ ones.”
Posted by John Freeman at 17:17 No comments: 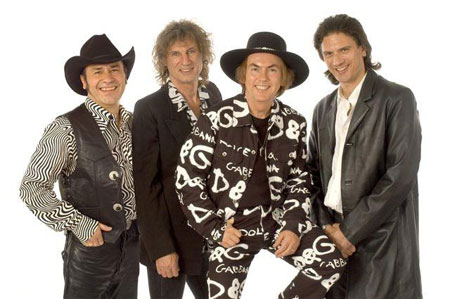 The new season at Morecambe's Platform kicks off with top traditional jazz star Kenny Ball and his band on their 50th Anniversary Tour on Saturday 5th September - just one of many acts at The Platform and the Dome this Autumn.

Other highlights in September include the notorious John Otway and Wild Willy Barrett, Matt Monro Junior on his Intimately Yours Tour and an evening of soul, funk and jazz with one of the best saxophonists in the music business today, Snake Davis and his band.

Dennis Locorriere, the True Voice of Dr Hook, makes a welcome return in October, followed by an evening of 60s and 70s nostalgia with The Animals and Friends plus the legendary Spencer Davis.

Dynamic Irish star Dominic Kirwan returns on his Classic Country Tour and October moves into November with Norman Prince and Paul Johnston’s evening of Lancashire Songs and Humour, fiddle music from one of Scotland’s top traditional bands, Blazin’ Fiddles, English folk and roots band Faustus (who are also BBC Radio 2 Folk Award Nominees) and an old time music and dance show from the Southern Appalachian region of the USA with Ira Bernstein and Riley Baugus.

An opportunity to enjoy the beautiful melodies of Irish duo Foster and Allen takes place on 13th November followed by 1940s Kansas City jazz from King Pleasure and the Biscuit Boys and an evening of rock classics from Livewire AC/DC tribute.

Autumn at the Dome starts with From the Jam featuring original Jam members Bruce Foxton and Rick Buckler who, together with Russell Hastings, will present a passionate interpretation of The Jam’s back catalogue.

In September, XWA Wrestling presents ‘Last Fight at the Prom 2009’ and tribute bands U2UK and Rumours of Fleetwood Mac will perform their shows.

Master of flutes, whistles and Uillean pipes, Michael McGoldrick will be in concert with his big band in October and top blues/rock guitarist Walter Trout will be on his 20th anniversary tour followed by tribute bands Illegal Eagles and Floyd 2.

Classic Legends of Rock, an amazing triple bill rock show with Focus, Martin Turner’s Wishbone Ash and the Groundhogs and Tony McPhee takes place in November and also a welcome return of Magic with their double show A Kind of Queen and A Kind of ELO.

All ages are catered for over the Christmas period with the return of the Merry Xmas Everybody Tour featuring Slade and T-Rextasy, Gordon Hendricks’ tribute to Elvis and the indoor ice rink at the Dome.

The Platform also has one of the UK’s finest comedians Marcus Brigstocke with his new show ‘God Collar’, Music for a Medieval Christmas which includes mulled wine and mince pies at the interval, the traditional Morecambe Brass Band concerts and family pantomime Mother Goose.

• This is just a selection of the shows and events on offer. Telephone the box office on 01524 582803 for a copy of the new season brochure or visit the web site www.lancaster.gov.uk/platformanddome.

Posted by John Freeman at 11:32 No comments: 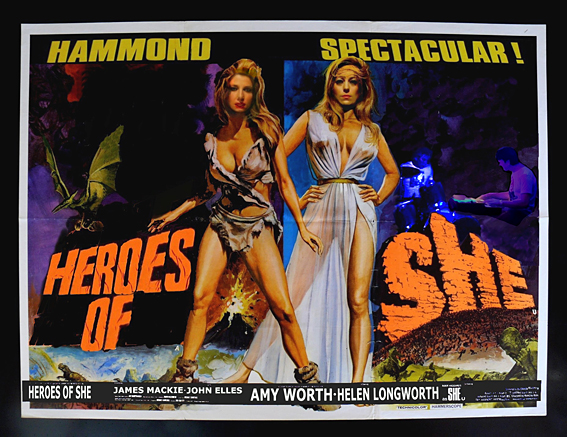 Lancaster band Heroes of She, has been selected to appear in the UK’s only Bob Dylan Festival.

The three day event, which takes place in Manchester over August bank holiday weekend (from Friday 28 August to Sunday 30 August) will see Heroes of She will play the final night on Sunday. The band will perform the Dylan classics ‘Wheels on Fire’ and ‘Subterranean Homesick Blues’ alongside its own material.

The festival, organised by AcousticFest, is one of only seven Bob Dylan festivals in the world.

"Heroes of She love a challenge," commented Helen Longworth, one of the two vocalists with the group, "and we've enjoyed translating two of our favourite Dylan songs into our unique line-up of Hammond organ, drums and two lead female vocals.

"Think Bob Dylan meets Jimmy Smith and you'll be somewhere near to what we're up to in our cellar here in Lancaster!"

The band is fast gaining a reputation as one to watch. Earlier this year Heroes supported The Charlatan’s Tim Burgess who was guest DJ at Brixton’s Jamm venue, and last year the band became the North West winners in the national Battle of the Bands competition.

"If you ever wanted to know what Thelma and Louise reborn in an explosion of wild Hammond power-groove would sound like, meet Heroes of She," said radio show musician and presenter Tom Robinson said on his BBC 6 Music show.

Bryan Sadler, interviewing the band for Diversity FM radio station, said "What an amazing band. The sheer energy was outstanding."

Headlining the Sunday evening set is Jersey Budd who has just released a CD featuring the vocals of Kasabian’s front man, Tom Meighan.

• Tickets for the festival are £4 in advance per night or £10 for a weekend pass and are available from the venue, m19, or from www.skiddle.com

• Heroes of She Official web site: www.myspace.com/heroesofshe
Posted by John Freeman at 17:18 No comments: