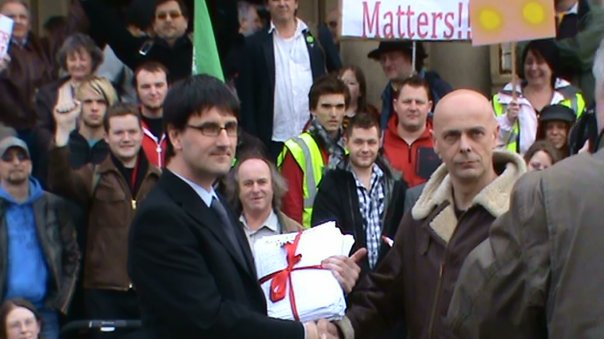 
Lancaster City Council has deferred a decision on the future of Lancaster Market - and another councillor has resigned from Cabinet in protest over the handling of the proposed closure, and other cuts to services.

After a long debate at Morecambe Town Hall yesterday, Council agreed to work with Market Traders toward delivering a "viable working option" on the Market's future by 31st March. "Something," says campaigner and trader Keri Christmas, "that is hopefully achievable."

Also involved in the discussions will be the National Association of British Market Authorities, which has successfully promoted the interests of its local members for over 80 years.

One market trader told virtual-lancaster they hope their involvement would help smooth out any possible problems over proposals that include turning the ground floor of the Market building over to a single retailer and moving all existing stallholders to the upper floor.

The Lancaster Guardian reports that the group is also likely to include input from the National Federation of Market Traders, the Chamber of Commerce and other relevant organisations.

The Council meeting proved long and fractious: in his budget speech for the Conservatives, Councillor Roger Mace was harshly critical of the leadership of Cabinet and the way key decisions had been discussed behind closed doors.

He has now resigned in protest and declared the Conservatives the "official opposition". (Read the full text of his budget speech here).

Elaine Blamire, leader of the Labour Party was also critical over the way that Cabinet was asked to make a decision of the future of the Market last month, while fellow Cabinet member and Skerton councillor Abbot Bryning - who opened the current Market many years ago - told Council he would not have supported the plans had he been at that meeting.

"We have now agreed to work together to find a solution," market trader Peter Corker told campaigners via the Save Lancaster Market Facebook group.

"It was an an interesting and very long day in the council meeting," added Keri, "but there needs to be lots of hard work before i's are dotted and t's are crossed."

She is adamant that public support proved a key factor in the Council's decision on the proposals. "It was you guys who made the difference today," she enthused. "You who signed the petition, you who have joined the goup and every man, woman, and dog who walked, skipped... all the way from Lancaster Market to Morecambe Town Hall. You are the most amazing bunch of people."

With a way forward hopefully now in the making, questions are being raised on all sides about how the proposed closure was conceived and presented to both Cabinet and Council. Serious questions about insistence on commercial sensitivity, which prevented the discussion of the full potential cost of the closure and relocation proposal, have caused particular concern from both councillors and public alike.

"From a personal point of view major questions need to be asked about the council officers," suggests Keri Christmas. "Maybe we need to be asking for answers [as] to how these well paid civil servants are able to turn this into a fiasco.

"These are peoples' jobs and lives at stake."

Campaign supporters are now suggesting ways for the Market to attract new custom. "We should save it, and spend money on the place to make it more attractive to shoppers," urges Tim Procter via Facebook. "Do that and the public will come, stalls will be taken up and rents paid to the council, jobs created and a landmark and 'institution' saved."

The financial problems the Market faces also need to be addressed. "It is all well and good to say 'keep the market', but nobody seems to comment on the £500,000 a year cost of keeping the present arrangements," says Bowerham resident Michael Mumford. "There are several alternatives, and (apart from the Conservatives, who put forward no constructive proposals at all) all parties are actively searching for workable answers."