Up the Junction: Greens call for safer road crossing 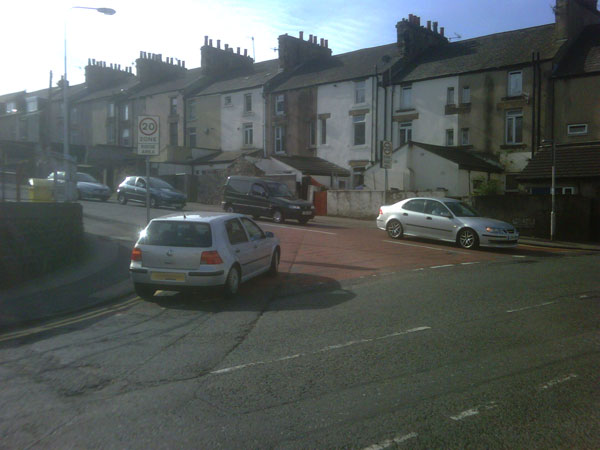 Bulk Ward Green councillors have asked Lancashire County Council for a pedestrian friendly re-modelling of the Ridge Lane and Bulk Road junction in Lancaster, saying it is a dangerous crossing point and raising concerns that there could be a death or serious injury if something isn't done.

The Ridge Lane and Bulk Road junction is a very wide road to cross if you are walking from Newton towards Lancaster's city centre. Traffic levels are heavy and vehicles approach the junction very fast indeed from Kingsway and sweep round onto Ridge Lane, paying very little attention to the elderly, children or anyone who can't move very fast.

Green councillors have been in discussion with County Council highways people about this junction but, so far, little progress has been made. They have now formally requested a significant build-out of the pedestrian pavement from the Salvation Army corner to create a pedestrian friendly environment, fearing that without it there may be a fatal or serious injury to Bulk residents crossing this road.

“Enough is enough," insists Coun Maia Whitelegg, commenting on the lack of progress to date. "This road crossing is extremely dangerous and I am fed up of delays and excuses.

"We need an engineering solution to reduce the distance that has to be crossed by pedestrians and to deter the speeding vehicles from sweeping round this bend at speeds that endanger the lives of our children and elderly residents.

"Lancashire County Council claims to be interested in road safety and to want to encourage walking so the time has come to stop dithering and get on with the job.”

Data from the Association of Public Health Observatories indicates the Lancaster area is "significantly worse than the England average" on road injuries and death." (Note within PDF via that link, page 32).

Cyclists are three times more likely to die on UK roads than abroad, according to researchers from the University of Surrey, Guildford.
Posted by John Freeman at 10:26

You can use the Lancashire Gov 'Mario' system to look at more up-to-date accident reports (incl 2010). Zoom in on Ridge Lane, choose 'Collisions' from the 'Transportation' layer and there they are. Hit the 'i' button on the collisions layer and then click for info.

No accidents reported there involving pedestrians, so this is clearly a perception of danger rather than actual danger for pedestrians. One accident to a cyclist. Four car collisions.

Thanks for that link. Some of the data seems to be missing, however - there was a fatality on Upper Market Street a few years back but that doesn't seem to be noted. (A priest was killed crossing the road). Pedestrian crossings were put in after this. Can anyone recall the story?

Accident statistics alone don't tell the full story. Just the other day I personally witnessed (from my bike as I rode down Ridge Lane) an elderly woman having great difficulty crossing the junction. She ended up in the middle of the road with traffic on both sides of her because there was never a gap for long enough to allow her to cross the road all in one go. She did manage to get across, so won't turn up in the accident statistics this time, but she may well be put off from trying to make the same trip on foot again. All too often people are too frightened to go out on foot or bike for just these kinds of road safety issues, and they are either forced into making short car journeys - perhaps needing someone else to give them a lift - or are virtual prisoners in their own homes. A default 20mph speed limit in residential areas would really help to give people more confidence about walking and cycling, and this would benefit us all...fewer cars making short journeys means less congestion and cleaner air for everyone, and the people doing the walking and cycling get health benefits too. I fully support the efforts to get this junction sorted so that pedestrian safety is the top priority.

"There is a national debate about numbers and the accuracy of numbers and the ways in which they are often misleading. This debate is relevant to this nasty junction and the main points are as follows:

"The numbers are often wrong and when researchers compare hospital data with official road traffic accident (RTA) data there is always a discrepancy.

"Even death is uncertain. If you die 31 days after an accident it is not a death. It is a 'serious injury'.

"This matters because intensive care intervention can sometimes keep people alive for 30-50 days after an accident.

"Using numbers is bonkers anyway. Local residents demanded a safe crossing at the Boot and Shoe corner about 20 years ago. County Council staff repeatedly told them 'no' because there were no injuries at this location. There were not enough dead or seriously injured people!

"Locals knew it was disaster waiting to happen and then it happened and the daughter of the people running the Scotforth post office was killed. Then they got a crossing!

"This is obscene and as a local councillor I am not prepared to wait for a death before the glaringly obvious is done to make this junction safe.

"The emphasis should be on 'road traffic danger reduction', not playing games with numbers from Mario.

"I knocked on doors on Bulk Road last night and asked about this junction. Everyone who answered said how dangerous it is and something should be done."