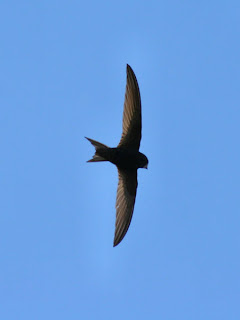 Wildlife experts are asking the public to become bird watchers  to check on the health of two of Lancashire’s most popular feathered attractions.

The Lancashire Environment Record Network is concerned that numbers of kingfishers and swifts could be badly hit this year for two completely different reasons.

The kingfisher, the UK’s most colourful bird, is expected to have suffered because of the severe winter weather. Lancashire’s kingfishers were virtually wiped out in the winter of 1962/63 and only one pair was recorded in the Lancashire Bird Report in 1964.

Numbers in the county gradually recovered although further hard winters in 1979 and 1981/82 led to further setbacks. By 2000 the population was thought to be at least 100 pairs and continued to increase throughout this century.

LERN is keen to record how the birds have coped after temperatures plummeted in December and January. It seems, from initial reports, that some have survived: but LERN is keen to know how many.

County bird recorder for the Lancashire and Cheshire Fauna Society, Steve White said: “It's too soon to say how Lancashire's kingfishers have fared this winter but the prospects are not good.

“The county's birdwatchers are halfway through a comprehensive four-year survey of all the county's birds, so results from this summer should give us the answer.”

LERN wants wildlife recorders and members of the public to keep an eye out for kingfishers on lakes, rivers and canals in the county.

Aerial displays by swifts are a thrilling sight but numbers are down by almost a third in the past decade and the RSPB notes swifts have "Amber" status.

It is believed that nearly 80 per cent of swifts nest on buildings and experts believe that improvement work on old houses is to blame for the decline. Swifts breed throughout Lancashire and the breeding population was estimated at 2,000 pairs in 2000, concentrated in the urban areas.

LERN is keen to know whether the county’s swift population is rising or falling.

Communications officer Alan Wright said: “If anyone spots a kingfisher or swift nesting site they can pass the information on to LERN or their local bird group and then we can assess if there are problems with numbers. “This information will be available to bird experts who can then plan ways to ensure that these two birds, that give nature lovers so much pleasure, thrive in the county.”

"The swift responses are coming in now, after we had a  number of kingfisher sightings," he told virtual-lancaster. "They're a fabulous sight at this time of year."

LERN will be officially launched this summer and will be the hub of knowledge for Lancashire’s biodiversity.

• You can email LERN when and where you see Kingfisher or nesting Swift this year: lern@lancashire.gov.uk