Food Waste Recycling on the way for Lancaster and Morecambe 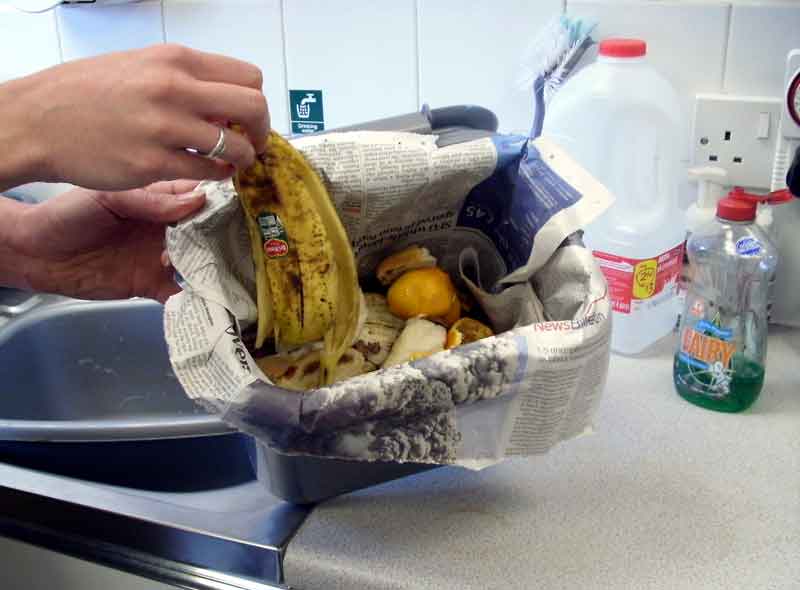 Lancaster City Council is to begin fortnightly collections of Food Waste in August, in a revamp of its refuse and recycling schemes, detailed on new calendars now dropping through letterboxes across the district.

The introduction of Food Waste Collections - which will save an estimated £400,000 a year - has long been an ambition for the Council, which agreed the rollout in 2008, agreeing costs of just over £200,000 to run it a year, with about £150,000 in set-up costs in order to buy food waste caddies.

The national Waste and Resources Programme has been running a number of evaluation studies across the country for several years, working in partnership with both metropolitan and rural councils to see which schemes work best.

The launch of the scheme also pre-empts possible mandatory legislation to introduce better food waste disposal at a national level.

From 1st August, Food Waste Collections in the Lancaster and Morecambe area will aim to collect waste generated during the preparation of meals and any food that is not consumed, including food that is partly used or that would be thrown away, but does not include packaging materials. If people are in houses that already have green garden waste bins, collections will also be fortnightly, when the green bins are collected.

Like the plastic, paper and card recycling bins (whose service is also changing, see below), food waste will be collected from the front of properties. The Council says the 25 litre caddies are designed to store food waste without spillage.

The indoor caddies are being supplied by Mattussi and the outdoor caddies by Straight, who also have the tender for Oldham council, among others.

Food and drink waste is a big problem in the UK, but dealing it provokes fierce debate on the pros and cons. The Department for Environment, Food and Rural Affairs notes that estimates based on research by the Waste & Resources Action Programme in 2008 suggest the total annual amount of food waste is around 18-20 million tonnes. Reducing the amount of food waste that is created, and where food waste does arise, ensuring that it is treated in the most environmentally-beneficial way possible, is consider crucial if the UK is to reduce the greenhouse gas impacts of waste management, and meet obligations under the EU Landfill Directive to divert biodegradable waste from landfill.

The council says that over 25 per cent of household waste is food waste and if sent to landfill it produces harmful greenhouse gases as it breaks down. By collecting food waste separately it can be turned into industry standard compost which can be used on parks, in gardens and on agricultural land.

“Food waste is the final major commodity that we currently do not recycle. Diverting this away from landfill is important to drastically reduce methane gas being emitted from landfills," explains Coun Jon Barry, Cabinet member with responsibility for environmental services at the city council.

"By capturing this gas in purpose-built composting areas we can actually use it to generate electricity."

Councillor Barry notes there will be concern at the decision to adopt fortnightly collections.

"I argued hard when the original decision was made for this to be done every week but I lost the vote," he told virtual-lancaster. "However, given the cuts we will be experiencing in the next two years, maybe the two-weekly solution is better, given that it is a lot cheaper."

Rodents and flies are a potential concern because they can transmit disease and under some circumstances might be attracted to waste as a food source. However, there doesn't seem to be much evidence to support claims that rodents or flies will necessarily increase with an alternate week waste collection, provided the waste is stored in an appropriate container.

Similarly, there is no evidence to indicate that any changes in numbers of flies associated with different collection patterns could give rise to effects on health. The location of waste, and the way that it is stored are the main influences on the risk of rodents being attracted to the waste (more on this here in a 2007 report to Sefton Council, PDF).

Overall, however, Food Waste Collection schemes seem to have been welcomed.

"Generally, they have been well-received despite initial misgivings," notes Jon Barry.

Oldham Council adopted weekly Food Waste collection last year, but will be merging its food and garden services from the beginning of June, to offer a weekly collection.

“The current system only allows citizens to recycle their food waste weekly and their garden waste fortnightly so the change to weekly collections is an improvement, Oldham Councillor Mark Alcock, Cabinet member for environment and infrastructure told the Oldham Chronicle.

Some councillors have objected to the whole Food Waste Collection Scheme. "The people in my ward are outraged by this decision," Keith Sowden said in 2008 after the policy was agreed. "They do not want stinking, rotting food sitting in their homes for two weeks."

"If people really wanted they could use the grey bin in the intervening week as this will get separated out in the new treatment plants but will form a compost that won't be of high enough standard to be used by, for example, households and will be worth less than the pure green or food waste compost," Jon Barry suggests. "Personally, I'd go for the two weeks and wrap any meat stuff up very well with newspapers."

Households will be receiving a small kitchen caddy: any food waste can be emptied into the caddy and when full the contents of the caddy can be emptied into the green garden bin for collection. Residents unable to accommodate a green wheeled bin will be delivered an outdoor caddy in which to store their food waste. This will be collected on the alternate week to the grey wheeled bin/orange sacks.

"The caddies are big versions of the small kitchen caddies that you get with the county council compost bins," says Jon, responding to concerns that these might be targeted by vermin. "They have flip lids that cannot be detached."

Plate scrapings, fruit and vegetables (raw or cooked), meat, mish and bones, rice, beans and pasta will all be recyclable under this new scheme, as well as Tea and coffee grounds, dairy products, bread, cakes and pastries.


The Recycling Boxes Collection Scheme is also being changed in August, following the opening of a new sorting facility in Lancashire which the Council says will make recycling easier and more convenient for local residents. It means that what we put in which recyling bin will be different.

• Green and Yellow Recycling Boxes will be for Plastic Bottle, Food Tins and Drink Can, Clean Foil and Glass Bottles and Jars

• Black and Red Recycling Boxes will be for Cardboard, Paper, Directories and Catalogues

Textiles can still be put out in carrier bags alongside your recycling boxes.

These changes will increase the amount of waste that can be recycled and make recycling easier for residents.

"The new recycling proposals will allow the council to save about £400,000 a year," says Jon Barry, "because we won't have to use as many vehicles to collect the different types of recyclables.

“Hopefully people will soon get used to the new arrangements," he continues, also outlining other improvements including ones that should mean less 'spillage' of rubbish when it is collected.

"The new arrangements for food waste and recycling mean we will be able to provide a more efficient service with much less potential for spillages (for example the large sacks [recycling staff currently use] won't be used from August," says Jon, "and recycling materials won't be sorted at the kerbside as they currently are.

"Under current arrangements staff are trained and are expected to pick up spillages," he points out. "But regardless of the system of collection, residents can contact our customer services centre to report any issues (01524 582491) and we will take the appropriate action."

The adoption of this new recycling regime puts the City Council ahead of the national Government, which was recently criticised for its vague ambitions on waste disposal. In April, the House of Commons Environment Committee has produced its report on the Government’s 2007 Waste Strategy, calling for major reform to the policy.

DEFRA’s Commercial Waste Strategy issued in October 2009 was similarly criticised for its “vague ambitions”, which should be replaced “urgently with firm action plans”. Its proposal to ban all food waste produced by commercial and domestic kitchens from landfill sites is currently under consultation.

DEFRA has proposed that mandatory food waste collection should be introduced nationwide and that such food waste will be used for compost and or sent to congestion sites. Incentives may be provided to convert waste into energy. However, with the change in government and plans to cut spending in all departments, it is not clear at this stage if these plans will be curtailed as part of the overall £16 million savings the department has been already been asked to make this year, currently outlined on an 'changeover' DEFRA web site.

• More detailed information on the food waste recycling scheme will be delivered along with the caddies in July and can be found on the Lancaster City Council website www.lancaster.gov.uk/bins

Separate food and garden collections might be inconvenient for households - but recent research has shows that such separation at source, not only cuts the costs of recycling; but produces far better quality materials from the processes - with a 40% lower carbon foorprint. It really is worth the inconvenience.

(see the CIWM April journal for the actual research)

IT Recycling In Lancaster said...

This will have an effect on the environment and cutting houhold and business waste can only reduce the carbon footprint. Also in the same way recycloing PC's and other computer hardware can help increase space and make a difference.

We have brown bins for green waste and blue bins for other recyclables, such as plastics, paper, card etc. The main problem is that there are still lost of things that can't be put in these bins as they're not recyclable. For instance, shredded paper, thin plastics (such as bags) etc. The sooner more waste can be recycled, the better.

Food is proabaly the biggest single waste we produce in the UK. Take out packaging (packaging regulations) and for most households, you're left with just the food that we throw away. With most households wasting £700 quids worth per annum, this soon mounts up, and when landfilled produces methane (it's anerobic because there's no air around the waste when it's burried). However, what I hate is the fact that people put their waste into the bin and go buy fertiliser from the garden centre. A little bit of work and food waste makes great compost. This really irks me, Lancaster and Morcombe are prime country reali estate, yet the Council needs to recycle food waste seperately??? All you need to do is get the caddy and carry the stuff to a compost heap in your garden. Then just turn the compost heap once every 3 months!!!

Composting is fine if you have a garden, but what if you don't? I'd rather the Council recycled food waste but I agree, those with gardens should be composting - and I'm sure many do. Maybe some of the food waste could be recycled and offered to local allotment owners/tennants?