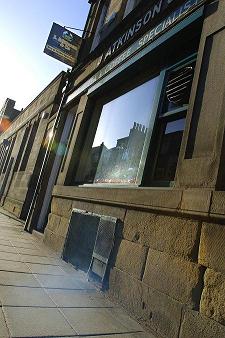 This latest success in the Awards marks a Hat-trick for Atkinson's, who have won a best drink category at these awards for the last three years running.

"We stayed overnight at the Hacienda and were treated to some excellent hospitality by our host Camilo Merizalde," says owner Ian Steel, "who spends every waking hour on this huge project of transforming an erstwhile cattle ranch into a veritable coffee growing laboratory.

"We saw many different varieties growing there and some totally new hybrids not yet available. So, nice to have some reward for his hard work - as well as ours!

"Also gratifying that we really did go to the trouble of sourcing and choosing this coffee at origin and have now had the endorsement of 60 judges in a blind tasting agree that this is a damn fine coffee!

Ian says the winning coffee, Colombian Santuario Bourbon Heliconias Lot 1,890 Mts. asl Appellation 'Cauca State' Controlee is also winner of Atkinson's in-house prize for coffee with longest name! ... and the first Appellation Controlee they have roasted. "How Traceable is that?"

J Atkinson & Co. have been supplying tea and coffee to the good citizens of Lancaster and surrounding areas since a young Queen Victoria came to the throne in 1837. The business was established in 1837 as the Grasshopper Tea Warehouse and has occupied these premises on China Street since 1901.

Five generations of continuous trading in the City have resulted in a marvellous accumulation of wonderful tea and coffee artefacts at the old shop on China Street. In the window the famous small roaster, an Uno dating from 1945 still wafts its delicious aroma out into the streets of Lancaster today. Everything from scoops to scales have been lovingly mended and cared for over the years and are still very much in use on a daily basis.

Atkinson's play their role in the wider global community by Ethically Sourcing the very highest quality of both tea and coffee and provide a specialist resource centre at their Academy for those who want to learn more.

• More about J. Atkinson & Co (Independent Retailer of the Year - Finalist) at www.thecoffeehopper.com; but why not simply call in at the shop on China Street (which is also cited as one of the UK's 50 Best Food Shops). Tel: 01524 65470
Posted by John Freeman at 15:19