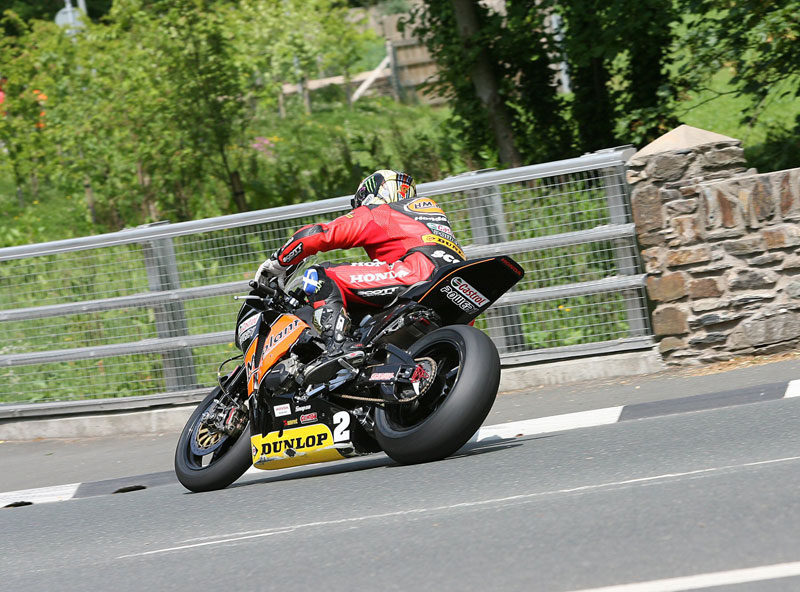 Morecambe's John McGuinness was denied a 16th win at the Isle of Man TT Races on Friday when he was forced to retire from the Senior race, the final race of the 2010 event.

The HM Plant Honda rider was leading the initial race before it was stopped due to an accident and was lying in second in the re-start just half a second shy of eventual winner Ian Hutchinson. However, an electrical problem on the second lap meant he had to stop at Glen Helen and, for the first time since 1996, the year he made his debut, he failed to grace a TT podium.

The initial 6-lap race got underway at 12.30pm and John led at Glen Helen on the opening lap but by the end of the first 37.73 miles he was back in fourth with less than four seconds covering the leading quartet. On the second lap, John really got into his stride and a lap of 131.135mph saw him take over the lead although it was still very close, his advantage over second placed Guy Martin just under a second. However, on the third lap, Martin crashed heavily at Ballagarey, fortunately escaping serious injury, but his machine set fire to the protective hay bales and the race had to be red flagged, ultimately declared null and void.

The race was re-started at 3.00pm but cut to four laps and it was almost a carbon copy of the first race, John, Ian Hutchinson and Conor Cummins running at an almost identical pace, only Martin now missing from the equation. Hutchinson led on the opening lap with John in second as the gap between the two fluctuated at each timing point, Hutchinson leading by 1.25 seconds at Ramsey. A lap of 131.410 mph by John saw him cut the gap to 0.61 seconds but as he swept through Glen Helen on the second lap, the bike cut out and he coasted to a halt just past the first timing point, the problem later diagnosed as a broken kill switch.

Speaking later, a disappointed John commented: "The bike was running faultlessly throughout but as I took the last left hander through Glen Helen, the bike just stopped like someone had switched the engine off. I started pressing buttons and clicking things but it was all to no avail and it's probably a 10p wire that's broke and cost me today. I've had no luck at all at this year's TT and I've now been forced to retire from the last three Superbike races through no fault of my own, so I'm gutted that I haven't been able to take a win this year."

"The pace was red hot and there was nothing between any of us but I felt really good out there and the conditions were getting better and better so it was going to be a fantastic race. It wasn't meant to be for me this year I guess and I feel for the team as they've all worked so hard to give me a bike to do the job. That's the TT for you though and, as we all know, anything can happen so I'll move on and look to put it all right next year and get back to winning ways."

It's now back to short circuit action for John with the next round of the National Metzeler 1000cc Superstock Championship taking place at Silverstone next weekend, June 18-20.

• Picture by Mark 'Wally' Walters
Posted by John Freeman at 13:41